On Justice in the Current Arab Context 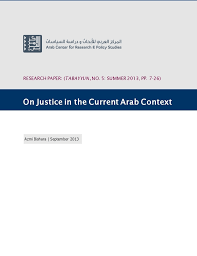 This paper explores the deep-rooted, transcultural history of justice and fairness, which has fluctuated and evolved into the contemporary concept of justice, which is linked to citizenship through the concept of rights after a long separation between the two. In this paper, justice and its evolutionary path are thus traced to Plato, Aristotle, Zeno, Cicero, and Roman law; then to the Torah, Christian teachings, and the ideal Islamic conception of rule; and, finally, to the revolution of modern thought. Exploring justice, in the context of modernity, reveals the notion of "rights," upon which justice has been founded in the modern era.

This essay further examines the expansion of the concept of justice to include social equality, in addition to natural equality, and to take "freedom" into account as one of the components of justice. Starting off with John Rawls and Amartya Sen, the paper moves on to discuss the Arab's encounter with Western modernity-especially through Egyptian intellectual Rifaa al-Tahtawi-and the current challenges confronting Arab thought with regards to what constitutes "justice" in terms of the rights related to equal citizenship, social justice, and civic and political freedoms. The paper argues that transitional phases, such as the one currently witnessed in the Arab world, represent an opportunity to broach the subject of justice and to make theoretical and practical propositions around this question.

Central to this paper is also the question of identity, a notion that is key to the building of a modern state. Identity is even more crucial in the context of the Arab world, where the phenomenon of the politicization of sub-identities within the state emerges as part of the struggle against despotism. To the author, all these challenges must be dealt with from an enlightened perspective; in search of a theory that not only organizes the relationship between the principles of equality and freedom, but also explores the concept of "justice" as inclusive of all identity groups, though not at the expense of freedom and equality.

* This study was originally published in the fifth Edition of tabayyun (Summer 2013, pp. 7-26). Tabayyun, published by the Arab Center for Research and Policy Studies, is a peer-reviewed academic quarterly journal devoted to philosophical and cultural studies.