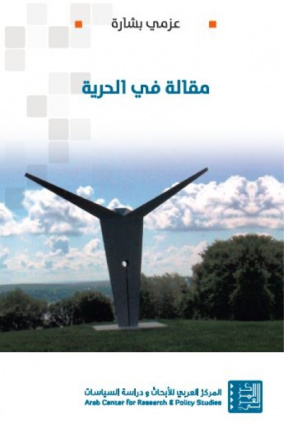 The book recently published by the Arab Center for Research and Policy Studies, entitled "Essay on Freedom" by Dr. Azmi Bishara, presents an issue that is one of the most important issues that has aroused the curiosity and interest of mankind since the beginning of time, and continues to interest their minds with the axiological problems that arise, which ​​are studied in the light of ethics, since the issue of freedom is first and foremost an ethical matter rather than being essentially ontological. In his last book, it is interesting that Dr. Azmi addresses freedom from the viewpoint of its conditional association with moral responsibility, as a first step towards an attempt to explore the connotations of freedom as an axiological qualities leading to several freedoms. Freedom is being discussed in its purely abstract sense, therefore we cannot but consider it laden with value.

From the title of the book, as well as the method of its philosophical discussions, you will find a style rooted in the traditions of philosophers such as René Descartes (Discourse on the Method), Baruch Spinoza (Theologico-Political Treatise) or even Voltaire (in his book Treatise on Tolerance).

Throughout human history, many researchers and philosophers tried to contemplate the subject of freedom; the German philosopher Emmanuel Kant, is a good example. But most of the treatises and studies of these philosophers have come within the epistemological context, which can be called (a philosophical theorization of the concept of freedom); a classical approach that no longer bears fruit today and no benefit is to be expected from it, since the freedom we need today is freedom in its practical form (as practice and praxis) and not as a theory and philosophy, and this is exactly the novelty introduced to us by the author of the book in his essay on freedom, the practical freedom, which he built on top of the ruins of the polemics of abstract, theoretical freedom. The author of the book considers that the issue of freedom today is surrounded by gravity, apprehension and uncertainty, especially if it is related to the relationship between the individual and the society in which he lives, on the one hand, and addressing the topic of choosing between the available options on the other hand. He presumes it requires a special, deep awareness by the society, in the historical context within which it occurs, as well as the extent to which the society allows this individual to fulfill his ambitions of choice, and the danger that will result from his choices, as expressed by the existentialist philosopher Søren Kierkegaard who considered that with free will comes peril or hazard, and with hazard begins the ordeal or suffering.

The first chapter of the book is titled: "Connotations of the word are not foreign to Arabic language", and Dr. Azmi begins by talking about the Arab intellectuals at the beginning of Arab modernity being influenced by the European idea of ​​freedom, starting with the freedom of the nation from tyranny and ending with the liberation of individuals from coercion in matters related to opinion and freedom of expression. (P. 13). The author of the book also examines the term "hurriyah" (freedom) from a linguistic point of view. He tries to bring the word out of its confinement and its pure theoretical conception, to the study the freedoms and the possibilities of achieving them and the limits that hinder them in our contemporary Arab societies. Then he classifies the freedoms in our current time into personal, civil and political freedoms. (P. 17) The interesting part of this chapter is the distinctive attention of the writer to the individual dimension of freedom, where the individual has the ability and the courage to leave the herd which is scared of individuality or singularity, and thus be truly able to discover his own internal freedom, but on the other hand does not exclude himself from the group, to show a new and realistic manifestation of the concept of liberation, laden with new meanings that require new tools (P. 23-24).

The second chapter is titled: "Birds are not free, people are not born free". Here Azmi Bishara's literary imagination comes into view, as he reminds us of the image of the bird in flight, to tell us about the longing and striving of man to set out freely, like a bird, fiercely resisting all that weighs him down (P. 27). This is why we find that he stresses that the subject of his article is never to be found in nature. Although man's dream is to be free like a bird, the latter is not free; (p. 27). Reasonable human beings always seek freedom by all available and possible means. Freedom is related to reason and will power, and without them, there is no point in addressing the issue of freedom. In addition to that, freedom is only related to the rational human being, and cannot be attributed to beings lower in rank than humans, nor those that are higher in rank, in reference to the angelic beings that have nothing to do with the subject of freedom, because this issue is irrelevant to them. The higher beings (angels) were created for a task other than the task for which the rational beings (humans) or the lower beings (animals) were created.

Chapter 3 is titled: Necessary philosophical remarks. In this chapter, the author acknowledges that he considers himself a member of a group of those who believe that the concept of freedom is based on awareness and willpower (p. 43), but we find him in this chapter navigating through the different views of philosophers, with their various interpretations of freedom, from the German philosopher Emmanuel Kant, to Kierkegaard and Martin Heidegger. He started by discussing Kant's freedom as being closely associated with ethics. The first condition for the ethical ideal to become a reality is freedom. For Kant, freedom represents autonomy, the state by which he describes the moral actor when he sets for himself the foundation for his action. Kant believes that freedom is a property that is intimately related to rational beings, since these beings do not act except with freedom (p. 47). Martin Heidegger opposed Kant's perception of freedom as a rational free will; he understands the ego, according to Azmi Bishara, as an ontologically established on the practices of man, who finds himself "here" thrown into this world, and he goes beyond his "thrownness" (a concept introduced by Heidegger) with the relationship of concern with what is around him (p. 49).

Martin Heidegger also has another existential interpretation of the concept of freedom based on what precedes the freedom of choice or autonomy of the individual who has knowledge of the world with which he interacts, Azmi considers it a field of freedom based on cognitive uncertainty (p. 49).

The fourth chapter is titled: Freedom, is it negative or positive?

Azmi Bishara believes that negative freedom does not manifest itself throughout history, either as a purely abstract freedom of choice or as a rejection of any restriction; and that positive freedom does not emerge without being accompanied by a process of liberation. Azmi considers these distinctions between negative freedom  and positive freedom is an intellectual process. He proposes intellectual classifications of elements which are not separate in social phenomena, noting that negative freedom is a rejection of restrictions. The author also believes that this arbitrary distinction between liberation and liberties is an artificial process. Liberation is a leap forward that encompasses a willingness to sacrifice, and from it emerges everything that has a value, which produces for us art and literature.The freedoms of our time are the achievements that citizens are supposed to enjoy, provided that they have the awareness and the responsibility to respect the freedoms and interests of others (p. 81).

The fifth chapter is titled: "The philosophical preoccupation with freedom", and in this chapter in particular, Dr. Azmi Bishara raises many questions expressing deep philosophical concern, and touches on the intimate relationship between the determinants of will and freedom of will, and the possible options that enable man to exercise this freedom granted to him, (P. 85) in addition to calling him to account considering that he is responsible for his actions. But Dr. Azmi considers that this issue has been addressed by many philosophers and thinkers and has had its share of research, study, and scrutiny, as the researcher does not find any difference between his discussion of this matter philosophically and discussing it dialectically or theologically, except in two issues: the first related to the type of power that controls the willpower and denies freedom of choice, and the second whether it is possible to know this power and be aware of it or not. This debate, which Azmi Bishara followed its historical development, is reminiscent of the model of the debate between the godfather of the German enlightenment Erasmus and the Protestant reformer Martin Luther about the freedom of will and the ability of man to create his own salvation. Bishara also discussed the views of the Greek philosopher Aristotle, through his ethical writings, namely Nicomachean Ethics; the Hegelian Paradigm which philosophically theorizes the concept of freedom and brings to mind the master-slave dialectic; Marxism and its perceptions of the concept of freedom and finally the existential philosophy that delved into the metaphysical meaning of freedom, especially the French philosopher Jean-Paul Sartre, who considered that man is freedom.

The sixth chapter is titled: Some of the major practical problems. In this particular chapter, Dr. Azmi Bishara raises many interesting questions. The central question that can sum up the content of the book as a whole, is about the quality of awareness necessary for exercising political freedom? Is awareness a necessary condition for exercising freedom? Or is any exercise of freedom a condition for developing this awareness? Bishara believes that achieving the highest possible level of awareness can never take place without exercising the freedom of opinion, expression and various civil liberties. Individual liberties are necessary as a condition for liberal democracy. Bishara anxiously asks: If we face the difficult choice between two possible options: stability and the preservation of life, security and peace versus the second option, which is freedom, which will we choose?

It is a question that has long been discussed by the helpless Arab peoples, but Dr. Bishara objects to this question, considering it a fictitious question. Whoever opposes giving people civil and political freedoms does not claim to support injustice, but rather weighs freedom against other values, such as patriotism, stability and security. (P. 113)

The seventh and final chapter of the book is titled: An intervention on justice ...A question in the contemporary Arab context, and here the writer Azmi Bishara tries to outline the term of justice before he crystallizes it in the theoretical context, because the term, as the author says, is in cross-linked semantic fields such as equality, reciprocity, convenience and integrity, among other connotations (P. 143) The history of the adoption of this term began with the emergence of the concept of Sharia, which is the law in its core. The author also asserted that any follower of the struggle of peoples throughout history will inevitably find that freedom was the condition necessary for justice, and about which people have different perceptions, according to the variance of their mentalities and their ability to exercise it practically.