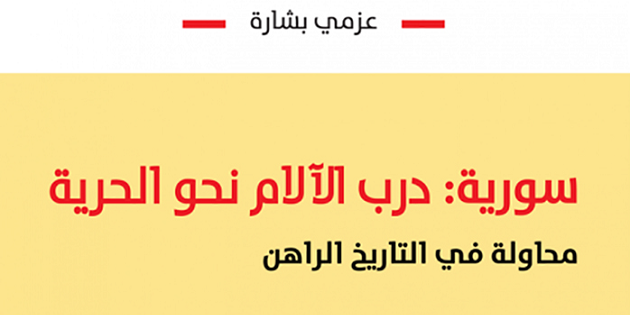 The main headline of Azmi Bishara's book is worthy of notice: "Syria- A Way of Suffering to Freedom" it is as if we are about to read an epic about a group of saints, and so it is. The revolution, the persistence, the lengthy struggle and the nature of the ruling regime are factors that make the group of people who rebel against it remind us of Tariq ibn-Ziyad, who burned his ships to put himself in front of two options: "victory or martyrdom," something ordinary human beings dare not attempt.

When one speaks of the present, he addresses an arduous task that may provoke some or cause others to object to the narration of a particular incident.

When one speaks of the present, he addresses an arduous task that may provoke some or cause others to object to the narration of a particular incident. The task would certainly be even more risky when it is related to the history of a revolution that has preoccupied the whole world; nations, peoples and governments. There are many different positions, regardless of the credibility of some. Perhaps that is the reason Azmi Bishara used a sub-headline: "An Attempt in the Present History." The man was modest enough to admit that his work was an "attempt" to delve into this revolution, as emphasized in the introduction of the book, stating that "this research as a historical documentation is aware of its limits, because it is in the midst of events."

It is difficult for any book to keep account of all the heroic acts of the Revolution and the names of its active figures, especially that the fields of revolution were numerous and varied, whether in demonstrations, thought, politics, media, aid or civil work, as well as its long duration. More importantly, the book is based on monitoring and documentation. But its goal is ultimately to study the logic of the incidents and their mechanisms rather than focusing on the active names, most of which are still unknown due to many factors, one of which is the ongoing security grip.

Of course, Azmi Bishara does not hide his complete alignment with the Syrian revolution's cause, starting by the title of the book. Moreover, this was clear from the first day of the revolution in his statements and meetings, despite his correct criticism within the book of many paths and positions of the revolution, or warnings about its possible outcomes, hoping for them to be beneficial, but from a position of spiritual and intellectual solidarity. He differs from many Arab nationalists and leftists whose greatest obsession during the Arab Spring was the fear for their slogans rather than supporting the humanitarian cause, and therefore their slogans lost credibility, and so did they.

I had the opportunity to read the manuscript of the book before it was published, and several fundamental issues caught my attention. Perhaps the first was the great effort spent in the collection of the details, incidents and statements, documenting and sorting them, as well as the study and comparison of the testimonies of many activists, intellectuals and opposition figures, with the risk that this kind of work would entail. The book was very successful in employing such testimonies, without falling into the pit of selectivity that usually accompanies this type of writing.

The second issue that caught my attention is the extraordinary ability to distinguish the myths that are spread everywhere about the revolution, whether by the regime media and the countries that support it, by confounding truth with imagination, and by spreading blatant lies in many cases, or by pro-revolutionary circles, depending on their desires, fantasies and illusions. This ability to distinguish was undoubtedly backed by a great effort of research, investigation, comparison, discussion, and a mind characterized by objectivity and responsibility. We can imagine the amount of time required by all of this.

The book traces the course of the Syrian revolution in general since its first demonstrations and its peaceful start, as well as its social dynamics, its transformation into an armed revolution, and the resulting violent, revolutionary, criminal or sectarian phenomena.

Fourth is the deep knowledge of Syrian history and present, which is manifest in the precise diagnosis of the nature of the Syrian regime and its structure, the background of its positions and behavior, as well as the shortcomings of the Syrian opposition in all its currents, the regional and international relations of Syria, the background of the positions of states and their interests in Syria, in addition to the knowledge of the ethnic, religious and sectarian configuration of the Syrian society, and the impact of all this on the course and developments of the revolution.

The book traces the course of the Syrian revolution in general since its first demonstrations and its peaceful start, as well as its social dynamics, its transformation into an armed revolution, and the resulting violent, revolutionary, criminal or sectarian phenomena. It also reviews the initiatives of the political solution, especially the Arab League effort, as well as the Arab, regional and international relations accompanying it, and devoted a section to monitoring the activity of the political opposition and its movement during the revolution. To understand the Syrian revolution in depth, the book studied the period of Bashar al-Assad's regime since he took power in 2000 until 2011, during which the regime missed the opportunity for political reform and gradual democratic change.

Concerning the examination of the Syrian regime and its relationship with the revolution, Azmi Bishara identified several characteristics of the regime, including that what distinguishes the Syrian regime from the Mubarak and Zine El-Abidine regimes is its rejection of any reform and its ability to use unlimited violence against the revolution in his country and against the Syrian people in general. He realized that the two overthrown regimes had not used enough force at the beginning to stifle the uprising, because the army was not blindly loyal to them. In addition to this, he  relied on his regional and international connections, as well as the fear of the communities of major cities and various social groups of chaos and sectarian strife.

Azmi Bishara believes that "the Syrian revolution can not be separated from the Arab revolutionary climate that prevailed after the success of the Tunisian and Egyptian revolution, and can not be analyzed outside its context.", which is something that can not be denied, regardless of our ideological convictions. This is the main direct factor in the outbreak of the revolution. The causes of the political, social and economic revolution have long existed, and there were stages when the Syrian regime was weaker and less stable. But the revolution broke out at a stage when the regime was at the height of its stability, and seemed comfortable with ending its international isolation. It is the factor of the historical stage and the Syrian people's cultural, political and perhaps emotional attachment to what is happening in the Arab region.

In other words, the motives and causes of the protests in Syria are structurally similar to those of other Arab revolutions. The Syrian people seek freedom and dignity, and long for citizenship and citizens' rights, as is the case with all Arab peoples. The main difference in this revolution lies in the specificity of this religiously, sectarianly and ethnically complex society, which has hampered the crystallization of an inclusive national identity that allows the separation of society from the regime, and thus also from the state. The second difference lies in the "geostrategic political situation of Syria and its being part of an international axis that does not support any democratic transition anywhere in the world, especially in its own countries." The third difference is the " the almost complete alienation of the regime from the society, and its dealing with it as an internal occupation force". These differences from other revolutions mainly explain, along with the structural features of the Syrian regime, the long and complex path of the Syrian revolution.

Bishara believes that "the armed struggle was the choice of the regime and not the revolution."

Bishara, despite the well-known controversy in this context, believes that "the armed struggle was the choice of the regime and not the revolution." But the use of weapons led to a structural transformation in the revolution, both in terms of the social sectors involved, or in terms of changing the nature of its leaders in the field, especially after the regime killed, arrested and displaced thousands of civilian activists. Gradually, the phenomenon of warlords emerged, and the criminal armed elements that existed within the security state became prominent, in addition to the jihadist elements who have their own goals, which are not the revolution's. The persistence of the revolution for a long time and the emergence of sectarian massacres and hate crimes, committed in particular by the regime, have exacerbated polarization in Syrian society, which has increased the risk of turning the conflict into a kind of sectarian war.

The book also attempted to explain the structure and evolution of political opposition in Syria before and during the revolution, indicating the subjective and objective reasons for its dispersion and confusion. But it stressed that the greatest danger lies in the organizational fragmentation of the armed forces today and the emergence of the phenomenon of warlords, along with the multiplicity of battalions and armed brigades that are not subject to any central decision.

The book attempted to explain the structure and evolution of political opposition in Syria before and during the revolution, indicating the subjective and objective reasons for its dispersion and confusion.

In the context of trying to find possible solutions, Azmi Bishara believes that disastrous scenarios are to be expected, unless a political settlement is reached that guarantees the regime's departure, the survival of the state apparatus, as well as a gradual transition towards democracy. The alternative to this settlement is "deepening the conflict and turning it into a sectarian and ethnic conflict" or "a failed state after the defeat of the regime." Therefore, he sees that the overthrow of the regime is not enough. The state may fall with it if there is no "political program around which the revolutionary forces will rally to build the future Syria." Without this, it is difficult to imagine the unification of Syria and its rebirth as a state that carries out its political, economic and civil functions, with a strong national army and national sovereignty.

In his book, Azmi Bishara does not conceal his sincere love for the Syrian people and his great admiration for their sacrifices, their courage and perseverance in the pursuit of freedom and tyranny. He therefore believes that "the material and moral energy of this nation can be transformed into a great renaissance for Syria, the Levant and the Arab nation." He also believes that this primarily depends on "the awareness and responsibility of political actors". He is right.