How 'Left Wing' Became a Misnomer for 'Right Wing' 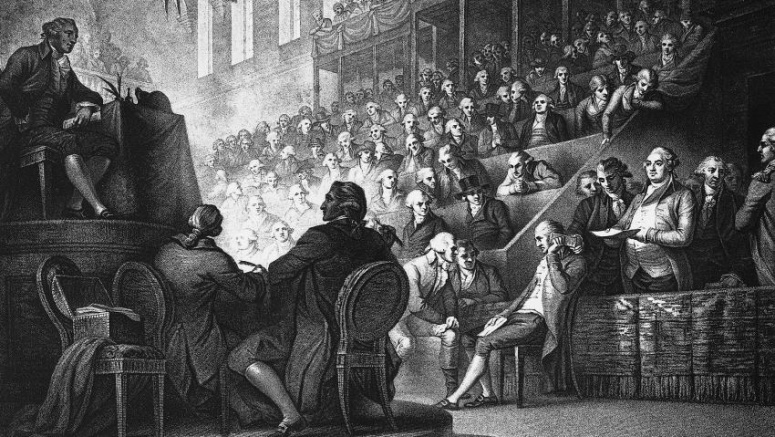 The term "left-wing" and "right-wing" were first used to describe the attitudes of deputies in the Estates-General at the end of the French monarchy and then in the National Assembly during the revolution of 1789 and onwards.

The term described their seating position in the assembly.
This is where the usage in modern European politics came from, with deputies' seats assigned to the left or the right of the legislature's hall.
In France, the deputies representing the Third Estate sat to the left of the hall.
These were the supporters of the French Republic, who believed in equality among political estates, calling for abolishing the privileges of the clergy and the nobility.

They defended the freedom of expression and thought.
On the opposite side sat the supporters of the monarchy and the hierarchy of the old regime.
But these attitudes changed over time.

The right wing no longer defends the concomitance among church, family, and the monarchy, while accusing the left wing of challenging the sacred and undermining the foundations of society.
At some point, the right wing became itself republican, and key elements of the right accepted pluralistic democracy.

Evolution
This was all before the "left wing" and "right wing" became terms that described comprehensive ideologies and worldviews, with a nominal link to the historicity of the word.
But these ideologies in turn became names for movements and parties that held on to their titles, even when they moved very far from what they are supposed to stand for, particularly as values are concerned.
The left wing in general, as opposed to the right wing, rejected authoritarian hierarchies and inherited privileges, and was generally in favour of the republic.
And unlike liberal parties that emerged in the 19th century, left-wing parties placed equality in a higher position above private ownership and personal liberties.
However, it was hard to imagine the left wing could come to do without freedom as a value, and championing civil liberties and political rights were the most important manifestation of this.

Yet these values changed by interacting with the economic and social structures of capitalist societies, as the notion of citizenship and political systems evolved.
Some left-wing movements, through a long and arduous journey, learned that favouring equality over individual freedoms was incoherent.
Individual freedoms are closely linked to freedoms in general, including political ones, which are a condition for equality.

The totalitarian left
The totalitarian regime that emerged in the wake of the Bolshevik Revolution and that exported its model in the aftermath of the Second World War, had called itself communist and socialist.
In truth, however, socialism and communism did not emanate directly from the left-wing tradition. Indeed, it was radical democracy not socialism that was the fruit of the French left wing we spoke of.
Rather, socialism and communism began as a lifestyle for some religious sects in the Middle Ages, and as a utopian ideal some writers long dreamt of.
The concept became political as it encountered democracy, when socialist democratic parties embraced it in the 19th century against savage capitalism.

Only then did socialism become a left-wing notion in the original sense, when it championed both social justice and democracy.
By contrast, the parties that developed socialism into a comprehensive ideology and way of life, failed to adopt democracy as the basis of the system of government.
Later, socialism became to these parties the ideology of a totalitarian ruling regime.
If we examine the totalitarian nature of regimes where political and civil liberties are totally absent, and then examine conservative traditions as compared to the privileges given to ruling party members, some of which have been inherited, we would conclude that the more apt description of these regimes is "right wing" not "left wing".
These regimes are right wing in the original sense of the word: conservative authoritarian regimes that are averse to freedom.
Indeed, their hostility to civil liberties and citizens' rights is completely at odds with the notion of equality they allegedly enshrine.

Right, not left
In this sense, Stalin was not a leftist but a right-winger, albeit his discourse was different from that of the traditional right.
The same could be said about Ceausescu and about Kim Jong-Il, who is by this measure in the extreme right, his regime being no different from fascist regimes even in their discourse.

This version of the right wing is much worse than the traditional patriarchal right, let alone the liberal right that accepts democracy, freedoms and the peaceful alternation of power with the left wing.
Yet some political forces insist on styling themselves as leftist, even when they explicitly declare that human rights and citizens' rights are a trivial and dispensable matter, secondary to the interests of the party or the political movement to which they belong.
Some of these forces have even justified barbarity against citizens, including torture, murder and mass displacement.
Some have supported regimes waging genocide against their own peoples, all while claiming to be leftist as though it is an inherited title.
These are right-wing forces and not left-wing. But we must qualify them further and say they are undemocratic or fascist right-wing forces, since there exist forces that are both right-wing and democratic.
Ultimately, the nomenclature does not matter per se. But some use these descriptions to boast, in the same way some might boast of their family fortunes.
What matters is that those who support dictatorship and justify genocide, must not be allowed to incite against others.
Rather, these voices must be relegated to a position of desperate and unconvincing defensiveness, before those who condemn their positions.
Their self-styled titles must be rendered meaningless, because virtue and vice, and good and evil, must come before leftism and rightism.