On Displacement, Migration and the Wave of Europe-bound Asylum-seekers 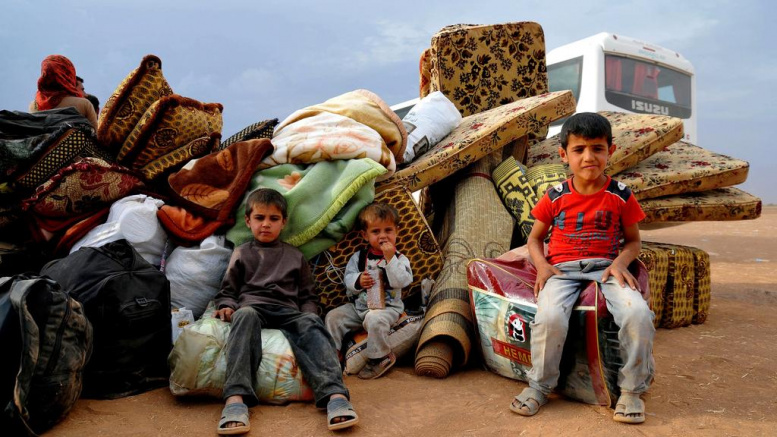 They were driven out from their home areas deliberately, following a policy of collective punishment, systematic bombardment and mass murder.

Many were forced to migrate from their populated neighbourhoods, after these were turned into battlefronts when the Syrian revolution transformed into a kind of civil war. This was the result of the regime's policy of unbound systematic violence and the absence of any red lines enforced by the international "community".

In truth, the situation in Syria is unprecedented, at least since the Second World War.

The involvement of armed groups that are not bound by the goals of the Syrian revolution, a year and a half after it erupted, displaced large numbers of Syrians as well. This was both on account of regime bombardment of the areas these groups seized, or on account of the actions of some of them.

By observing the policies of the regime, including its scorched-earth policy, one sees that the regime is implementing a systematic displacement policy. The goal: to get rid of the largest possible number of Syrians.

The Syrian regime recently came up with a new definition for what makes a person belong to Syria. A Syrian is someone who is loyal to the regime, even if this person hails from Pakistan, while those opposed to the regime are deemed non-Syrians.

The ordeal of Syrian refugees and displaced persons has gone on four years, both inside Syria and outside, in Turkey, Lebanon and Jordan - whose communities have so far borne the brunt.

People usually flee from bombardment, war, killing and detention to shelter in nearby regions and countries, until stability is restored - after which they return home.

What is different about the recent wave of Syrian refugees travelling to Europe, however, is that Syrians are sick of waiting in neighbouring countries, though conditions there vary.

Syrian refugees are searching for permanent solutions for their families and children, which is understandable after their years-long wait.

Yet what is different about the recent wave of Syrian refugees travelling to Europe is simultaneously the most dangerous thing about it. We are not talking here about people fleeing bombardment or death, but people who had already done so to other countries.

Now, after their initial migration, they are migrating again to countries that can offer them long-term settlement.

Do not be surprised if I tell you that some Syrians have even left the Gulf countries they had fled to, in search for stability and livelihood, and even a new nationality for their children whenever they have the chance to go to countries that could accommodate them.

I fully believe a father who says he seeks asylum in Europe for the sake of his children - a responsibility that "breaks the back", as they say in Levantine Arabic.

Another thing characterising the wave of refugees is that the majority of them are not completely destitute. They are originally middle class families that lost everything, and barely have enough left to pay off traffickers, or they have relatives abroad.

We can say that Syria is losing a large part of its middle class and its professionals as a result. Indeed, those living in Turkey, Lebanon and Jordan, and even Gulf countries, are going to return to Syria sooner or later. But those emigrating to Germany are a different case.

Older migrants may return one day, but the youths who will enrol in German schools this year are meant to have a different future, away from the region. In their case, what is taking place is permanent migration.

This is the crux of the issue, not the racism of the Hungarian government or other governments in eastern Europe, which need a special approach. Nor is the issue the mature, reasonable and much-appreciated position of the German and Austrian leaders.

The Arab media, however, has a knack for forgetting the essence of an issue when tackling human tragedy.

The crime is taking place in Syria, not Europe, and it must be resolved there

First of all, the crime is taking place in Syria, not Europe. The problem must therefore be resolved there, and criticism of those who fail to show solidarity must not blind us from the crime being committed in Syria.

Secondly, the policy of forcible population transfers being implemented by the regime, and recently the Islamic State group, must be stopped.

Thirdly, there is a large segment of Syrians who have despaired of the prospect of reaching a solution, and are looking to save the future of their children away from the "scene of the crime".

Fourthly, in parallel with supporting the steadfastness of the Syrian people and with working towards a solution to the crisis in Syria, adequate conditions must be prepared to host displaced Syrians in Arab nations, including giving them the opportunity to live, work and educate their children with dignity.

Ultimately, these people will return to Syria. But it is unacceptable for human beings to live for years as refugees in tents - literally or metaphorically.

Fifthly, in parallel with condemning the stance of Hungary and others trying to block refugees from entering, the Arab nations, the Syrian opposition forces, and Syrian and Arab NGOs must work hard to dissuade Syrians from emigrating.

This cannot be done by preaching alone, but rather by making sure Syrians, who have been exhausted by ordeals and empty rhetoric, live in adequate conditions.