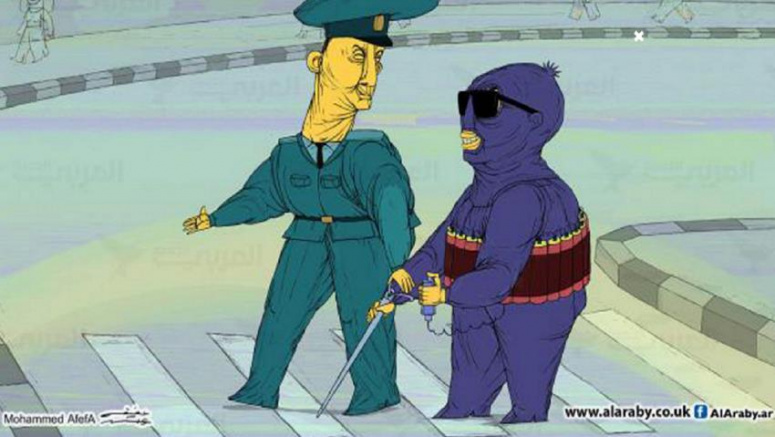 Binyamin Netanyahu’s comments are of course a lie.

It is the settlement-building that encourages or rather causes 'terrorism', to use Netanyahu's term, or 'resistance' in our language, since standing up against illegal settlement expansion and construction in occupied lands is not terrorism.

An individual who engages in resistance may have other motives. However, these are not supposed to matter to Netanyahu or Ban Ki-moon, because they do not change the nature of the battle against occupation.

'Terrorism is the problem' has been the mantra of all occupiers in history when confronted by those who refuse to be occupied.

But behind this mendacity and self-deception lies an odd claim: that somehow had the resistance not emerged, occupied people would have been content, and happy to sing the praises of their very occupiers.

This time, Netanyahu took his deception up a notch. He accused the UN chief of supporting terrorism, calculating that the current international approach to the Arab region is favourable to him.

Indeed, he must have thought that this was good timing since everyone seems to join the anti-terror club, of which Israel can claim to be a founding member ever since it declared 'terror' as the sole issue facing the region.

Right now there is a coordinated propaganda campaign to impose defeating terrorism as the only driver of local and foreign policies in our region. But this game, the game of conflating tyranny and occupation with terrorism is old and will no longer wash.

Terrorism as violence against civilians and public institutions, abhorrent though it is, is a symptom of a wider malaise: the tyranny of the ruling Arab regimes.

Nor is it a socio-economic phenomenon, such as poverty, marginalisation, exploitation, or sectarianism and tribalism.

It is not a question of civil rights, citizenship rights and freedoms either.

Most Arabs, like people everywhere, just want a better life and to live in safety.

Terrorism, as dangerous as it is, is a transient phenomenon that does not constitute a social-political alternative to existing regimes.

The radical elements in the French Revolution used the term positively in describing its violence against the counter-revolution, and so did Bolshevism in its early stages.

All national liberation movements were called terrorist groups to discredit them, and the same applies to all forms of violence against ruling regimes, whether targeting security forces or civilians.

In general, ruling regimes are not interested in developing an accurate definition of terrorism, which would be exclusive to "violence against civilians and civilian installations."

For one thing, this would mean that resisting military fascistic regimes is not terrorism, especially if these regimes are systematically involved in killing and torturing civilians, and preventing people from peaceful political expression and change.

The problem is that the term conflates resistance with the likes of Islamic State, anarchist movements in 19th-20th century Europe, communist militant groups, and sectarian militias such as the Abul Fadl al-Abbas Brigades and others.

These latter groups are indeed guilty of nihilistic violence meant to stir chaos and terrorise civilians, engage in sectarian vendettas, destabilise states and impose totalitarian lifestyles as an end rather than a means.

Two sides of the same coin

Terrorism and tyranny are two sides of the same coin.

Those few who carry out acts of terrorism use the despair of the many at the possibility of peaceful change; but some of these acts of violence also reflect a wider anger within totalitarian societies.

Not a single scholar disputes the fact that the revolutions of 2011 in the Arab world were peaceful, civil and spontaneous.

Peaceful revolutions, by overcoming the fear factor, breached the defences of the tyrannical regimes, and paved the way for change through peaceful means.

That process started in the Arab region, and for a while, it appeared as though the dream was coming true. But even this promise could not preclude violence.

To be sure, change is a long and difficult process. However, those events revived the hopes of all those marginalised and oppressed in the world, and as hopes of peaceful change rose, violent movements appeared insignificant.

The violence of tyranny

In the year of the Arab Spring, some regimes tried to prove the point that Mubarak and Zine El Abidine were toppled because they failed to deploy enough violence against peaceful protesters.

It was thus no coincidence that the Gaddafi and Assad regimes pursued a military approach to protesters as terrorists, to trigger a confrontation between terrorism and counter-terrorism like a self-fulfilling prophecy.

Violence has since escalated dramatically, as the alarm was sounded against terrorism. But when that happened, not many bothered to consider "details" like arbitrary detention, torture and violation of human rights - not to mention the bombardment of civilian areas.

The central issue in Arab countries is tyranny, and the violence unleashed is that of the ruling tyrannical forces.

Unlike terrorism, tyranny affects society as a whole, its economy, culture and even morals.

Nihilistic violence is not the substitute issue, and stressing tyranny as the main issue in the countries blighted by this violence and proposing a democratic alternative is the mission of democratic forces.