The Arab-Iranian Conflict is Political, Not Sectarian 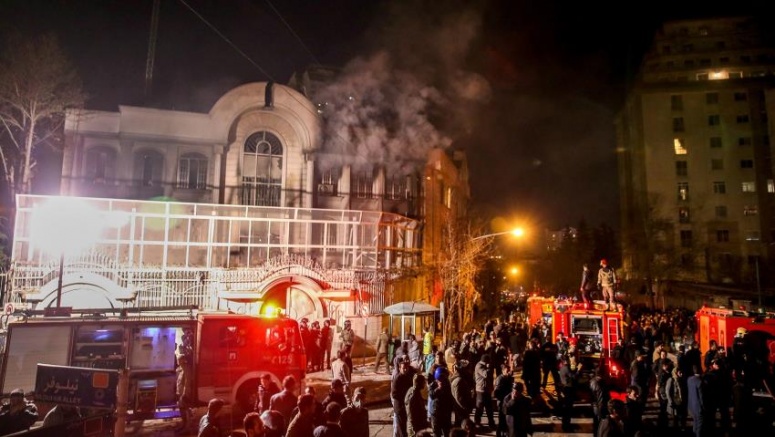 In a desperate attempt to cover up his bungled policies in the Arab region and the wider Middle East, US President Barack Obama told Congress in his State of the Union address that the region was caught in a thousand-year-old Sunni-Shia conflict.

In other words, Obama resorted to a cheap claim fitting only of politically illiterate Western journalists who prefer to rehash these bromides that explain nothing by explaining everything, overdoing their due diligence.

It is a known fact that many essentially political and social conflicts, and rivalries over power, have been deliberately framed in a sectarian manner to mobilise people on the basis of sectarian identity, and thus re-shape said identities and manufacture them where they do not exist.

As a result, these conflicts that are not sectarian in nature appear often as sectarian conflicts.

There is a difference between having a Shia community in a given city or region, and having a homogenous monolithic bloc that transcends boundaries and that behaves as a single entity. The same applies to the Sunnis, who never coalesced into one separate sect.

In all cases, history has never known a Sunni-Shia conflict along those clear lines.

Even today, we cannot speak of Shia and Sunnis as cross-border communities, and any claim to the contrary belongs to the realm of fiction. If the current efforts to render this fiction a reality succeed, these sects would then become alternative nationalisms or alternatives to nationalism.

This is not the case in the Arab world right now. Despite the oppression that is construed as sectarian discrimination, for example against Shia in Iraq and Sunnis in Syria, the Arab identity alone has remained truly trans-sectarian.

This is not our topic today. What we care about here is warning against subscribing to the Obama-sanctioned division of the peoples of the region, especially in terms of the current Arab-Iranian political dispute.

The problem is that Iran, after the revolution, has adopted a sectarian religious discourse, not just internally, but also in its foreign policy.

Iran, in the process of the expansion of its regional influence in the Arab region, has used two main tools.

The first and most important has been building a state that embodies the Shia sect, and that seeks to represent all Shia Muslims in the world, thereby rekindling and reshaping sectarianism into a political identity.

This is exactly what has been happening in our Arab region since the 1980s.

The path of Iranian expansion cuts through Arab societies, with a view to shear off some of their components. This means that the conflict is also an Arab-Iranian one, since Arab societies are being harmed.

The sect is not the issue. It is the right of every person to hold on to the sect he or she inherits, or embrace the sect of his or her choosing. The issue is that a major regional power is trying to impose itself as the representative of broad segments of Arab societies outside the framework of their citizenships.

The second tool is exploiting the weakness of the Arab regimes in the confrontation with Israel and the regimes' attempt to cast off the burden of the Palestinian cause since the start of the era of unilateral peace accords began by the Egyptian regime in Camp David.

Iran is attempting to gain legitimacy in the eyes of Arab public opinion by adopting the cause of Palestine, which has largely been abandoned by the Arab regimes.

Iran's move combines religious ideology with a pragmatic view that exploits the Palestinian cause. However, many events have since proven that Palestine is not Iran's true calling, nor it is the calling of Arab regimes that have also exploited the cause.

This much became clear when Iran decided to classify the Arabs negatively or positively depending on their attitudes regarding the Syrian regime rather than Palestine. Iran can now forsake Palestine itself in the name of Palestine.

Indeed, things border on the absurd when Hamas in Gaza is deemed to be a "false resistance" by the Iranian-led regional axis, because true resistance in this camp's eyes is measured not by resisting Israel - but by siding with Iran and the Syrian regime.

This is evident from Iran's meddling in Arab countries, and from how it divides Arab societies using subversion, propaganda and political manipulation.

It follows that the worst possible response to this policy would be aggravating the Sunni-Shia sectarian narrative.

Indeed, apart from its inherent moral baseness and wickedness, this discourse would help Iranian strategy, because it would push entire segments of Arab societies into Iran's arms.

The main battle is against Iranian hegemony in Syria and Iraq. Those who want to stop Iran must support these two peoples.

In Syria, the opposition has understood that the sectarian discourse undermines the interests of the Syrian people and helps the cause of the regime regionally and internationally.

In Iraq, Sunni Arabs cannot alone prevail against the sectarian regime without working with their Shia Arab compatriots.

Those who want to tackle Iran's strategy must proceed along two tacks:

1- Fortifying Arab societies against sectarianism by emphasising citizenship and rights and liberating Arab identity from the ruling regimes' ideologies - while affirming it as inclusive of all Arabs - Sunni, Shia and Christians; and respecting the identities and cultures of non-Arabs.

2- Rehabilitating the Palestinian cause as an Arab cause.

Palestine must not be adopted to spite Iran, but because it is a gaping Arab wound. Palestinians continue to fight the oppression against them, and have been facing settlement-building and the Judaisation of Jerusalem alone, while Gaza lurches under a direct Israeli-Egyptian blockade.

Iran has refrained from giving real assistance to Gaza, a real scandal for Iranian policy. So should the GCC countries now not put pressure on the Egyptian regime, whose coup has survived thanks to their support, to end its siege of Gaza?

Recently, the regime in Sudan cut ties with Iran in solidarity with Saudi Arabia, while some Sudanese officials hinted that Sudan could normalise ties with Israel. Is this odd move not doing a service to both Israel and Iran?