10 Years After The Plot.. Azmi Bishara is Exiled Yet So Close! 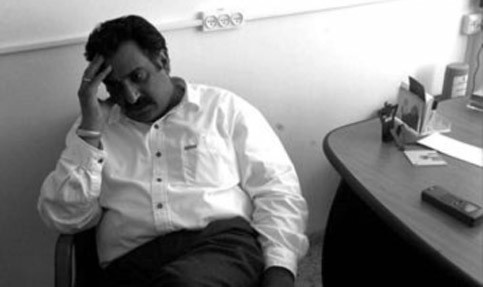 The physical exclusion of Bishara from Palestine did not diminish his intellectual and political impact on the arena that he was forced to leave on the 23rd of March 2007. The arena may not have him anymore, but it is still rippling with his controversial ideas and their dynamism. The Israelis are still prosecuting the NDA project at an ever greater speed by castigating its messages and inciting against those who lead it. In fact, the NDA still remains the main driver of the ideological and legal conflict between the Palestinian minority and the Zionist regime. The right-wing leaders of the current government won’t stop threatening NDA leaders with a fate much like Bishara’s. And this is precisely why we dedicated a special edition to his role in enlightening and reviving political thought inside the Green Line, which had almost entered a long period of intellectual slumber since the early nineties, before a combination of factors awakened many of us from that state of hibernation and showed us a way out of the deadlock.

While Bishara's renewal of political thought escalated when he, along with activists and militants at home, managed to swiftly build a large organizational tool that is the National Democratic Rally, which attracted large crowds and many Arab elites, Bishara also caused an unprecedented shake-up to Zionist academic elites who previously basked in the creed of Zionist liberalism and were proponents of the “democratic Jewish state”.

Paradoxically, some Arab citizens of Israel who have forcibly integrated in the “democratic Jewish state” found themselves in alliance with its Zionist supporters against a single person and his ideas. On the other hand, how can the same people who espouse the fundamental Zionist principle - that the state of Israel is an expression of the right to self-determination of the Jews - and who espouse its slogans, symbols, and national anthem at conferences, abandon hostility toward those who revolt and rebel against the Arab-Israeli model? Some have disagreed with Bishara, and some have discussed his ideas respectfully, but there were those who were unable to face his ideas and thus despised him personally. The latter group lost all respect.

The “internationalist” Arab Israelis continue to be hostile to Bishara, even though they utilize his ideas to the extent that those who hear some of them talk would not help but wonder if they truly belong to their party - a party that has not yet revised its historical positions. Bishara turned their miserable predictions upside down and forced them to confront their own viewpoints ever since the establishment of Israel - still without renouncing them officially. The fact is that those "internationalists" had previously resisted national movements, such as the Earth Movement and the Countrymen Movement, which carried a nationalist agenda that radically clashed with Zionism. Yet for many reasons, both subjective and objective, they could not form a real challenge to the Zionist regime, though they contributed to the establishment of the current democratic project that has reached many Palestinians in Israel.

THE SHOCK TURNS INTO A NEW CHALLENGE..

After orchestrating the plot against Bishara and forcing him to flee the country, the Israeli establishment thought that the battle had ended, and almost started to relax and prepare itself for an easier stage. The Arab masses, especially those who support the political revolution inside Israel, would either stand up and seek another alternative or hide inside their homes in despair and frustration. The public was shocked for a while after Israel’s plot was revealed, but it immediately turned its anger into a united, condemnatory stand, whose first expression was a demonstration of thousands of people in the city of Nazareth. The demonstration was one of the biggest in the party’s history.

Afterwards, on the eve of the 2009 Knesset elections, the Israeli establishment, with its large parties and security forces, had to go through a second round of ideological confrontation. In this round, they aimed at destroying the NDA and preventing it from running in the elections by portraying as an extremist party that is detrimental not only to the Israeli public, but also to Arabs and their interests. If that had happened, the party would have lost its grounds and supporters, which is what the Israeli establishment aspired to. But Israel was shocked when, two years after Bishara had fled, the party succeeded in the elections. The party’s political opponents were even more shocked by the 14000 extra votes it got.

It is no accident that the NDA obtained political victories even after Azmi Bishara was forced to flee. This was not the product of strong public emotions. It was the product of studious party work since the NDA was established. And Bishara had a huge role in this, for he was not only a political thinker and a distinguished parliamentarian, but also a man of organization. He practiced trial and error, learned, built upon his knowledge, and changed. This was unlike many politicians in Israel who relied on “fieldworkers” alone to build movements and branch out. Bishara was attentive to details. We would meet with members of the party branches in cities and villages across the country. We would prioritize the role of the youth, which Bishara was especially concerned with during the process of building the party. He cared about youth who are proud of their national identity and are aware of the demands of modernity as well as social and human liberation.

There is no doubt that Bishara would sometimes get frustrated, as we do, by the delay of progress here or there, or the failure of a plan at this or that branch. We desired to make greater and faster progress, because hostility and rivalry were increasing day after day. Soon enough, those enemies and adversaries discovered the power and influence of ideas hostile to the official Zionist ideology and to anti-integration and distortion. However, the party was still able to make remarkable achievements in a relatively short period. Bishara understood that the NDA needed to be stronger and more solid in all aspects because of the multitude of enemies and opponents - from both the Israeli establishment, which did not stop inciting against the party and its leaders, and other opponents who did not engage with ideas and instead attacked Bishara, in envy and malice.

You have noticed how our comrade Bishara was able to move on from academia and adapt quickly to the tasks of building a party. He knew how to speak to the concerns of people and be in solidarity with them - which was in line with his views on the need to couple nationalism with the principles of citizenship through addressing people's concerns and engaging with them. He wrote about nationalism, democracy, and different schools of thought. He theorized about the structures of communities and Arab regimes, subjects that are typically delegated to “specialists and educated intellectuals”. But then you would find him sitting in a house in a remote village, listening to old man talking about his memories in 1948 or the needs of his town. He would handle a number of tasks on the same day: fight with the institution in the Knesset, visit a party branch or the newspaper's office, to collect subscriptions and make suggestions for its development, or participate in a street demonstration.

For these reasons, Bishara remains very present at home, despite his absence from the country. He is so far away, but he is close ... very close.

Awad Abdelfattah is a political writer and the former general secretary of the Balad party. He is the coordinator of the Haifa-based One Democratic State Campaign, established in late 2017.