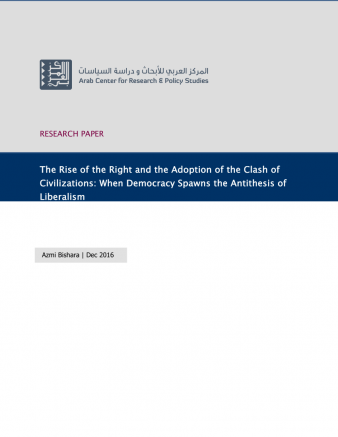 This study presents three main hypotheses: first, that the conflict currently underway in advanced Western countries is a conflict between two cultures, each with its own value, class, cultural and political component – or between cultural identities. Second, that Russia and China have adopted the credo of the clash of civilizations against the spread of democracy and liberalism, with the view that these are Western constructs. Third, that the gap between, on the one side, the elites who embrace liberal values in alliance with the marginalized sector, minorities and women and, on the other side, the white working class, the rural, and others, had led to a weakening of the newly-forged and historic tie between democracy and liberalism, and a shift to growing conflict between them.

The election of Donald Trump has been the subject of a deluge of commentary and analysis following the initial shock experienced by most media outlets and pollsters, who had discounted the possibility of a Trump victory. Large swaths of the intelligentsia, east and west, remain astounded by the electoral behavior of the American voters; astounded at the voters’ tolerance of the candidate’s abrasive personality, for his erratic behavior alternating between tacky and obnoxious, and for their support of his ideas that were, until Trump, assumed unspeakable in the culture of liberal “political correctness”; as Trump’s ideas are considered “politically incorrect”, so to speak.

Among these stunned observers there is a unanimous conviction that Trump is not fit to be President of the United States, and that it is unthinkable for such a man to hold office, given its importance and effect on the world’s largest economy and on global politics as a whole. As if the unthinkable does not tend to happen or could not happen.

During the election campaign, one could easily mistake Trump’s political language for that of someone having just walked out of a New York bar, where a few guys had been enjoying a few happy-hour drinks after work. His discourse reflected the typical banter of conservative guys on a night out, as they get sidetracked into a discussion of international politics after watching something on the TV screen, or after a terrorist attack. Each of them concocting ways to teach those terrorists and the states they come from a few lessons. Should they turn to domestic politics, the problem would boil down to inept bureaucracy, corrupt politicians, the establishment’s ignorance of “real life”, the hesitancy of leaders and their inability to be decisive and make the right decision. Women who had the nerve to be smart would be mocked, and bold references would be made on skin color, gender, ethnic origin, religion, and so forth, reflecting the angry politics of a narcissist convinced that only he holds the answers to all the problems baffling politicians and experts. Needless to say, these supposedly magical solutions are impossible to implement, inexplicable suggestions rest on ignorance of the facts, and are internally inconsistent.

That is however the talk that goes on between some grown men, resentful about the changes to the world around them. They have a sense that their country is being taken away from them and find it hard to relate to it: a black president; a woman presidential candidate, whose husband, should she be elected, would be “first lady”; gay marriage; health insurance that they complain funding it for the lazy who don’t work; not to mention unregulated immigration, which they also complain funding it from their taxes. Ironically, the United States is a country built by immigrants, yet immigrants who have settled, generation after generation, tend to develop a deeply ingrained sense of belonging and belief that they are the native population, and that the world’s poor are flocking in to eat into the wealth that they have accumulated through their own hard work, and the toil of their parents and grandparents.