Third Volume of Istishraf Dedicated to the Future of Energy 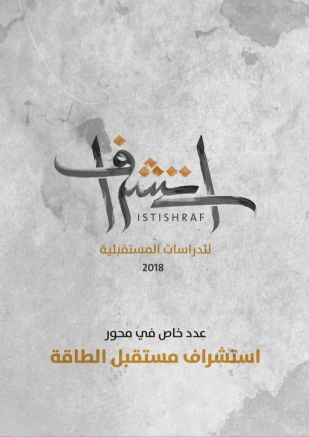 The Arab Center for Research and Policy Studies (ACRPS) has published the third issue of Istishraf, the annual journal for Future Studies. Dedicated to "Forecasting the Future of Energy", this special edition raises several questions on the sustainability of the prevalent energy model today (namely fossil fuel), including its production, distribution and consumption. It considers the implications on the environment and human livelihood, the efficiency of current energy transition strategies, and the usefulness of economic diversification policies, in addition to questioning the political and geopolitical balances in a versatile world and unstable energy markets.

In the Arab context, this edition examines the most critical energy issues prevailing in the region, starting with the central issue of oil for both exporting or importing Arab countries. Addressing the topic of "peak oil", the first study by Mamdouh Salameh argues that talk of a post-oil era is a myth and that oil will remain a central determining factor in the 21st century and beyond. Next, Khalid Rashed al-Khater, examines the drop of oil prices in recent years and forecasts the conditions that could change Gulf economies from rentier economies reliant on extraction, deduction and distribution to economies that rely on work, production and diversification of activities and exports. Turning to Algeria, Abdelmadjid Attar explores the conditions of a balanced energy transition in this country, meaning an energy transition that guarantees and complies with the exploitation of non-conventional fuels, both now and in the future. Kacem Houdjedje compares this transition process with Switzerland's pioneering experience in energy transition, presenting it as a model to be studied and followed by Arab countries. Ending the section on oil, Rachid El-Bazzim examines the Moroccan case study.

In addition to oil, this edition also features studies devoted to gas. Second to oil in its importance among fossil energy resources in the region, this section starts with Naji Abi-Aad's discussion on the increase of Gulf consumption and the challenges inherent in building a Gulf gas network. Laurent A. Lambert and Jordan Lee examine regional integration in the field of gas within the GCC since the launching of the "Dolphin Gas Project" in 1999, and propose three future scenarios for Qatari gas exports through pipelines, considering the ongoing blockade on Qatar. Marwan Kabalan studies the eastern Mediterranean region (the Levantine basin), which has witnessed important gas discoveries over the past few years, extending mainly through Egypt, Cyprus, Israel, Turkey, Lebanon, Palestine and Syria. Kabalan addresses these discoveries from a geostrategic perspective and in the context of instability and poor cooperation between these countries, as well as chronic or recent conflicts. Chaker Drif concludes this gas-based section by addressing the dimensions of natural gas, which has become very important in recent years, particularly in Algeria.

This edition of Istishraf also dedicates a study to one of the most important technological breakthroughs witnessed in the last two decades, which is the "Internet of Things" (IoT) . In this context, El Sayed Yousef explores the role of IoT in changing traditional energy systems in terms of production, consumption, generation and distribution, and describes its impact on energy generators and its users in the near future.

This third annual volume of Istishraf  concludes with reviews and discussions of the most influential books recently published in this field.

You can find the journal available for purchase at the Istishraf website where selected articles (Arabic) are available for free download.