The Launch of the Doha Historical Dictionary Web Portal 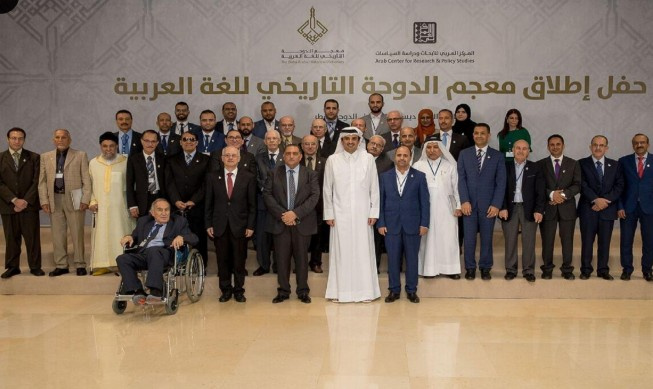 His Highness Sheikh Tamim bin Hamad Al Thani, Emir of the State of Qatar on Monday launched the web portal for the Doha Historical Dictionary for the Arabic Language. The ceremony represented a pivotal moment in the history of Arab culture, organized by the Arab Center for Research and Policy Studies, and attended by academics and linguists from around the world. The ceremony opened with a recitation of verses from the Holy Quran, followed by a video devoted to the Doha Historical Dictionary. Dr. Ali al-Kubaisi, who sits on the Academic Council of the Dictionary, during the opening speech, assured that Doha’s sponsorship of the historic dictionary represents the Arab people and Qatar's enthusiasm to enhance an Arab identity by advancing its language, which is the embodiment of its existence. He stressed that the Doha Dictionary is a qualitative leap in the service of the Arabic language, the first successful Arab attempt to historicize their language.

Dr. Azmi Bishara, general director of the ACRPS and the Doha Historical Dictionary, assured in his speech that this project and its historic launch would not have been possible without vision and faith in joint Arab action, Arab competencies and strong management. It was successful because of the cooperation between scholars, the executive board and computer experts, after other initiatives to develop a historical Arabic dictionary were abandoned. Bishara noted the achievements of previous projects, beginning with the establishment of the Academy of the Arabic Language in Cairo in 1932, and the contribution of the German orientalist August Fischer (1865-1949), who sought to record the development of the Arabic language until the year 300 AH. Other attempts were made, including the work of Sheikh Abdullah al-Alayli in Lebanon, and attempts to start collecting evidence in the Tunisian project of the Arab Historical Dictionary, which succeeded in collecting the evidence of 90 Jahili poets from 200 to 609 AD, and the attempt to unite the Arab linguistic and scholarly communities through symposia and selecting primary and secondary sources of the corpus.

Certainly, these efforts are appreciated. However, these efforts, along with their achievements, never led to the publication of a historical lexicon of the Arabic language until the Arab Center for Research and Policy Studies was patronized and launched in 2012 by His Highness Sheikh Tamim bin Hamad Al Thani, then Crown Prince, who has supported the project from the outset. Bishara went on to say "We do not have the idea then, but we are the ones who have the courage to build this boat and sail it in the vast ocean of Arabic language history. We have demonstrated with the academic approach, management skills and institutionalized teamwork, in the academic Council, the executive board and the lexicological teams, that it is possible to implement this project.” He went on to say that vision and determination and the generous and understanding care provided by the visionary Qatari leadership helped the project overcome a bumpy road dotted with complications and initial ignorance.

Bishara stressed that the achievements of the historic Doha Dictionary of Arabic in five years since its inception is a huge achievement and unique at both the Arab and international level. The first two years were devoted to developing the foundations and methodology and the computerized database preparation. In the following three years, a hundred thousand dictionary entries were completed covering the seven hundred years before the year 200 AH (800 CE), despite the special difficulties that characterize Arabia. The difficulties in the case of the Arabic language surpass any other language with a historical lexicon. In this regard, Bishara referred to the experiences of historical dictionaries in other languages which took decades and even centuries to produce. He made clear that the historical dictionaries are linked in all languages to renaissance and enlightenment, because the language is the basis for the revival of any nation. He concluded by saying the Arab Center decided to call it the 'Doha Historical Dictionary of Arabic' because the project is also a precious gift from Doha to the Arab people as a whole. Qatar demonstrates that a country with a visionary leadership and freedom of will and awareness of its people and resources can be a pillar of an Arab renaissance.

The executive director of the dictionary, Azeddine Bouchikhi said in his speech that the Arab people, through a historical lexicon, have become capable of combining their literary, religious, scientific and cultural heritage, which is expressed in the texts as a whole. Bouchikhi mentioned that the historical dictionary, which was unique in its production of 100 000 entries in chronological order from the oldest inscription or text until the year 200 AH. He pointed out that the Doha Historical Dictionary, in its first phase, is a foundation that remains open to the participation of scholars and researchers to propose correction, modification and enrichment. Dr. Ramzi Baalbaki, Chair of the academic council of the Doha Historical Dictionary, stressed in his speech that the dictionary's attention to the harmony between the heritage of knowledge and modern human knowledge following the linguistic revolution was a pioneering move. He thanked the State of Qatar and its sponsors for patronizing this historic project and praised Azmi Bishara's enthusiasm and sincere efforts to support it.

During the ceremony, the audience listened to a poem by Di Ould Adeba entitled "The Dictionary of Doha, Dream of the Arabs" and a poem entitled "The Dictionary of the Nation" by Hussain Alzeraee. The poets are both linguistic experts in Doha's historic lexicon. Werner Arnold, Professor of Semitic studies at the Institute of Language and Culture of the Near East of the University of Heidelberg and Lutz Edzard, Professor of Arabic and Semitic Languages at the University of Erlangen-Nürnberg both provided testimonies in which they commended the work of the Doha Historical Dictionary and its standards of achievement.