The first chapter deals with the definition of the distinction between the individual and the term and the concept. He explained that the individual is translated as well as the term, but the concept does not mean its translation unless he proves himself in the interpretation of phenomena in the context to which he is translated. The second chapter deals with the relationship between the Church and the political entities that began to crystallize on the ruins of the Roman Empire as a relationship of unity and conflict that ended with the rise of the State. The author considered the rise of this state and the concentration of the king's authority as one of the most important signs of the end of the Middle Ages. The third chapter, "Renaissance, Catholicism and the centrality of man," refers to what will be known as the Renaissance, which witnessed the renaissance of Catholic arts, theology and theology, and shows how the richness of the Church and its influence transformed into an environment that fosters a worldly culture in its themes and orientations. He also refers to the classical tendencies of this age, namely, a return to Greek and Roman philosophy and art, and to Roman political thought with fundamentalist reactions to these important transformations.

Chapter Four, "Religious Reform," refers to the idea that Protestantism did not arise at once, but from important intellectual buds in early Protestant movements that criticized Martin Luther's critique of the worldlyness of the Church, its wealth, worldly powers and its alleged ability to give salvation to humankind. He also followed the development of the splits of fundamentalist currents in Protestantism, considering schism as a natural consequence of the logic of Protestantism, which does not believe in ecclesiastical reference. The logic of Protestantism based on the right of the believer to understand the text led to different destinies of violence, atonement and abandonment of society, on the one hand, and to the pacific anti-violence currents that later founded tolerance. Which raised the demand for religious freedom, established the tradition of neutralization of the state in the religious affairs in the Protestant countries after centuries. The fifth chapter, "In the Development of State Logic," is a central chapter in the book because it deals with the idea of ​​a state in which secularism can not be understood without a new definition. It distinguishes between the term and concept of the state; it explains the difference between power and state; People, and the emergence of a class of full-time politicians, and also traces the dissemination of the idea of ​​state and absolute power.

The sixth chapter, Religion and the Beginning of Scientific Discoveries, concludes this path to stand at another crossroads: the development of experimental science and scientific thinking. It tries to analyze the dialectical relationship of the Church with science, Trying to explain the meaning to take away the science of meaning from the areas that break through it. Falcon under religious perceptions a world with a beginning and end, purpose and purpose. This vision is based on a moral construct derived from the meaning of human life in the universe. As the meaning gradually disappears from the universe and natural phenomena, including life itself, this perception enters into a predicament.

Chapter Seven deals with the debate between the rational mind within the framework of religion and religion within the framework of the mind. It deals with the dialecticality of subjecting the mind to religious certainty, subordinating religion to mental certainty, and how intellectual development tends to become the second. We distinguish the impossible cognitive certainty in the divine from the certainty of faith. The "secularization" of the religious sphere itself was also addressed by exposing it to the scientific and monetary method.

Chapter 8 "In some aspects of religion in Enlightenment" was devoted to the study of the Enlightenment in order to overcome the preconceived ideas about this intellectual wave, starting from the common among the Enlightenment thinkers. It is the cognitive optimism and the belief that scientific knowledge ensures solving the problems of society. Which stems from ignorance and superstition, and after presenting the main lines in the thought of enlightenment in the most important models, the author devoted part of the chapter to display the conservative Catholic reaction in France in the same stage; a reaction that did not receive the attention of research that is appropriate. While Chapter Nine "Beyond Enlightenment briefly: from the ribbons to the absolute mind and from it to the critique of the mind" on the German Enlightenment represented by Kant and his philosophical interaction with David Hume, who tried to interpret religion from the human nature, not revelation or the unseen, and touched on a relative expansion to the philosophy Hegel, whom the author considered critical of the critique of Enlightenment, but a critique that goes beyond the Enlightenment itself and elevates it to the level of an exemplary philosophical style. It accommodates criticism of the enlightenment of religion, and critiques the religious thought of enlightenment by restoring the mind to religion as part of the process of understanding the idea for itself. Religion is the most accessible and common means of communication with the Absolute. The essence of religiosity is moral life. As long as religion is the main carrier of moral consciousness, the state must have a relationship to religion.

Chapter 10, "Secularism as Ideology in the Nineteenth Century," deals with secular associations working in public affairs, which preached a strong social ethic, not the religion of reference, which relied on middle-class intellectuals who founded the demand for separation of religion from the state. The nineteenth century of religion, while Chapter XI, "Models in modern criticism of the Enlightenment" to modern models of criticism of the Enlightenment, including what has become called postmodernism. Starting from one of the most important manifestations of the crisis of modernity is the shock of the control of Nazi thought and the overall overall in the industrial societies developed by a sophisticated rational culture. He also dealt with the model of the intellectual school, which identified the origin of the problem in the dangerous slide that lies in turning the mind into a tool, and which leads to the human heart into a tool. 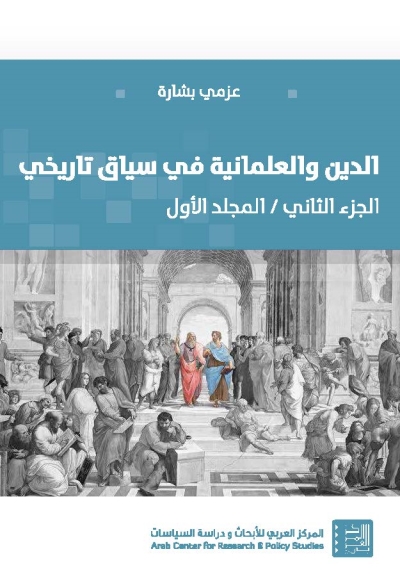