Political discourse and other studies

The "political discourse" is a research study and a critical intellectual critique of the political discourse that developed and developed among the Palestinians in Israel. It also contains important critiques of Israeli research that later formed the foundations of the Palestinian critique of this colonial research. Is still accompanied by scientific research so far, in the second part of the book raises the gospel critical readings in kind to the most important Palestinian political events and events in Israel, all the return to the most important sociological framework in the view of Bishara, an update in the absence of the city at the level of For without neglecting the colonial nature that surrounds this frame from the outside. If it is true, the book is a critique of the political superstructure, as reflected in its political manifestation in the absence of the Palestinian city and the emergence of a distorted city in colonial reality.

The "trivial political discourse" succeeds in breaking down the concepts of an institution and a dialogue in Palestinian political discourse in Israel, and other social and political phenomena. Equality, collective rights, culture and national identity, the organization of the Arab minority, the sectarian issue, the family, the Arab-Jewish partnership, the left, political Islam, class and consumer society. 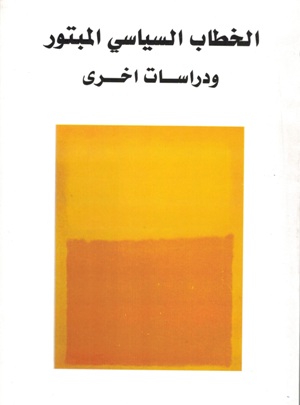