"I am not a politician in the mainstream sense of the term political man, but a fighter, in the sense that I have done a political act against injustice and justice" (p. 29). In this sentence, Arab thinker Azmi Bishara sums up his political experience among the Palestinians in the 48 regions. He did not practice politics, meaning that he was not a political employee. His term of office ends with the end of his official position. Job.

I have written a lot of university studies, scientific researches and books about Azmi Bishara in recent years about his role in the development of Arab nationalist thought and in establishing political thought among the Palestinians in Israel. He wrote more about his role and his theories about the Arab revolutions, especially his national approach to democracy, .

Bishara wrote a lot about the Palestinians at home, and his studies continue to provide researchers with theoretical perspectives to understand the political, intellectual and social transformations of these Palestinians. However, the book by Professor Saqr Abu Fakhr "In exile exile .. Dialogue with Azmi Bishara" is of great importance in understanding the experience of Bishara political, and its role in the political and intellectual process of the Palestinians at home. The dialogues between Abu Fakhr and Bishara dealt in part with his personal experience at home, and the difference between this dialogue with Bishara and other dialogues held with him, whether in newspapers, the media or in scientific journals, that the dialogue we are dealing with questions the personal experience of Bishara, The most important internal political and intellectual leaders on his role in the march of the Palestinians at home. While the other dialogues were aimed at exploring the inside of Bishara's vision, the current dialogue is about Bishara, while the other dialogues were about seeing Bishara inside. There is a big difference between the two types of dialogues, between understanding the reality as it has created and renewed a gospel in that, and a personal understanding contributed to the impact and the formulation of this reality.

In this dialogue we see the role of Bishara as a fighter in two areas, politics and thought. The struggle may be through writing and through politics. This makes the difference between thought and writing as a function and politics as a profession. The Palestinian as an academic, intellectual and thinker in the colonial context must be a fighter, because he is biased to a just cause. Otherwise, writing becomes a functional act that seeks personal progress in the colonial framework without challenging it, and the policy turns into a job that expires after its absence.

In his dialogue, Bishara refers to the discussion he had with the Israeli Communist Party when he belonged to the party. This is a heated intellectual debate that he describes with extreme precision regarding the Palestinian issue, the national issue and the relationship with the state. The debate with the Communist Party's historical positions, especially after the Nakba and the founding of the National Democratic Rally, and the intellectual discourse, which also resumes the political discourse of the Communist Party among the Palestinians in Israel, is further explained.

"We began to observe the return of some Palestinians to the Zionist parties, and not to shy away from organizing large-scale preliminary elections for the Zionist parties in the Arab regions. I have the opinion then that the overwhelming majority of the forces of the national movement, which started to consult seriously, adopted it. This opinion is that we must start with a completely new discourse, taking into account the Arab Palestinian identity, the question of Palestine and the interests of Arab citizens, We can not manage our appearance and go to the Arab world alone, especially since the majority of Arabs in the interior are moving towards Israeli citizenship "(p. 117).

In this dialogue, Bishara explains that citizenship itself carries a challenge to Zionism if it is taken to a far-reaching extent with a Palestinian national identity, and here is Bishara's proposal in the meetings of the organization of the national movement and the beginning of the establishment of the assembly. The strategy of Bishara is summarized in this dialogue as follows: If the issue of citizenship, which involves the privacy of the Arabs inside, and we go to the end, to enter them in contradiction with the Zionist nature of Israel, and at the same time, we build the national movement, and affirm the Arab Palestinian identity of the Arabs of the home and their collective rights as indigenous people. Yeh and minority rights "(p. 118). 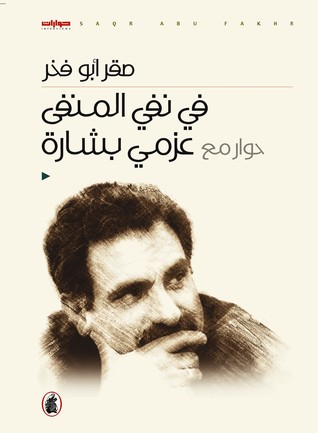