To Be an Arab in Our Times

In light of the political, cultural and social crises faced by the Arabs, and in light of the question of the identity crisis, and within alliances chosen by Arab regimes at the expense of the resistance against the occupier ... it becomes necessary to research the meaning of «To Be an Arab in Our Times», Bishara (Center for Arab Unity Studies).

The work includes studies and lectures presented by Bishara since mid-2007, divided into three sections: "Arab issues", "American variables at the end of the Bush phase", "Palestine and the Palestinian cause".

The writer stresses that the process of renewal of thought by individuals, and based on the intersection between the path of needs produced by the historical social process, and the course of the history of ideas. "The Arab nationalism is an urgent and pragmatic need to reach not only a modern society based on belonging," he said. "The Arab idea is not a traditional one. It is a modern idea. But also to provide the citizen with an inclusive cultural identity that neutralizes the majority of sects and clans ... from controlling the individual's political affiliation. "

Bishara stated that the facts do not provide evidence of the success of the establishment of the national identity in the Arab countries as a national identity, pointing out that «in such a situation, which reflects the reality of communities and clans and fragmentation of the state and its inability to build a nation, Arabic is romantic only as a bad political intention expresses a position ». In Bishara's book, the reading of the 23rd July Revolution project seems necessary in the framework of the task of renewing the Arab nationalist thought. In presenting a critical reading that is far from dazzling, he sees the need to understand this project critically and build upon it " New consciously aware of this history ».

The main axes that must be raised by any Arab nationalist trend, which relate to the issue of unity and what the citizen earns from achieving, citizenship in the Arab national project, civil and citizenship answer to the sectarian issue, economic and social policies in the country, And its main units.

Bishara wrote about the resistance and the need to discuss currents, pointing out that the idea of ​​resistance against Israel and the American occupation has become more and more in the hearts of the Arab people since the liberation of southern Lebanon in May 2000. Arab advancement is not possible without raising the spirit of resistance of the foreign occupier, Bishara stressed that any resistance movement in an Arab country is not subject to foreign occupation and its job is to expose its allied regimes with the United States.

Thinking about renewing Arab thought can not be limited to current addresses. Thus, the richest book of his book new readings, stressing the files did not attach great importance to the cultural debate in our days, and pointed out that «dealing with the Arabic language and its uses turned into a social problem began to refer to different classes of social classes on different cultures», declaring «we establish because Our differences in the future will become a war of cultures. "

In the second section, Bishara presented a reading of the situation in the region, based on a reading of the international situation after the end of George W. Bush's administration and the neoconservatives, recalling that the local leaders, who grew up as allies of America, From this point of view, we can read the talk about "Arab reconciliation": it is a rescheduling of Arab differences until Obama's policies become clear. Bishara considered the new US president a "sound phenomenon" only, but the popular phenomenon that led to change in America is worthwhile.

With the failure of the neoconservative policies, a new international reality has emerged, in which there is no alternative camp for unilateral power, but it gives more scope to the national state and the will of the people. However, the alliances of Arab regimes with America and its surrender have prevented the Arabs from exploiting this international circumstance. Understanding to fill the vacuum in the region.

The book is a contribution by the Palestinian thinker in the context of the question of the renewal of Arab thought, and although it is impossible to summarize what has been said, the work, as mentioned in the conclusion, connects the issue of promoting the modern Arab identity and linking the fate of Arab nationalism to its ability to accept the tasks and challenges of modern society. It also links the task of renewing Arab thought with the nation-building project, and identifying demands and programs in this direction that are understandable to people, which can be linked to their interests. 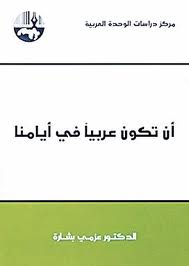