The Arabs in Israel ... a vision from within

This author was first published in the Palestinian interior, in 1998 under the title "The Political Discourse," and was published in 2000 by the Center for Arab Unity Studies in Beirut. The Center is requesting an introduction to its third edition, after we have added two chapters to it.

After these years, we found it necessary to add a chapter on the socio-economic situation of this part of the Palestinian people dealt with in the book, and another chapter on the question of "Jewishness of the state." The Arab cultural center has finally turned to the problem of the "Jewish state" because Israel has raised the issue of its recognition as a Jewish state on several occasions in recent years. There is no doubt that her relationship with the subject of our research in this book is an organic relationship.

We have left the rest of the parts unchanged, because some of them include theoretical analyzes on which positions were built and a guide for practical experience. In addition to its academic value, considering the renewal of the approach to the issue of Arabs in Israel in theory, it also has a documentary value for those who wish to study the type of analysis that led our political effort in the process of building the national movement. In fact, our theoretical analysis has not changed much in its main focus. We claim that the days proved that this analysis was correct, and more than that, many of its expectations were met. The model he proposed allowed for the diagnosis of future development trends, especially about the two simultaneous developments in Arab society at home:

1. A process that is manifested in the emergence of a subordinate and distorted political culture that is generated without the mediation of national consciousness, that is, directly generated by the socio-economic marginalization of the Arabs in the framework of an entity founded on the ruins of the Palestinian people. This process stems from the process of excluding the Israeli society and state of Arab citizens by the policy of discrimination and racism on the one hand, and the formation of Arabs and Arab identity in an ongoing process of communication with the history of the country and its recent past and with the rest of the Palestinian people and the Arab region in general.

Since that period, our approach to the subject of identity in this book has been that identity is not an eternal given, but rather a product of a complex and changing social culture. But they are not shaped and changed from nothing but from existing elements.

Our analysis of the Arabs at home has shown that it is not possible to understand the question of the Arabs of the inside only structurally, regardless of the date of the emergence of this issue, that is, analyzing the structure of the State of Israel as a normal national state, the Jewish state in which an Arab minority is subjected to discrimination or neglect Religious minorities under the discourse of the Zionist Orientalist). The Arabs in Israel are the original inhabitants of the country and they are part of the Arab nation, which is in a state of conflict with Israel and the Palestinian people, which was subjected to an armed robbery on land that included the demolition of its national project. Their cause has historically emerged as part of the Palestinian cause. Without the emergence of the refugee issue, there would have been no Arab "minority" at home. The Israeli practices that involve the confiscation of Arab lands inside and surrounding them and their demographic consolidation, and the work to restructure their cultural identity in proportion to their containment as alienated minorities, in exchange for full equality and full Arab character in a Jewish state ... Is part of a policy that constitutes a historic continuation of the question of Palestine and also sets for itself historic goals. It is still being carried out and implemented by a colonial colonial settlement, which is also colonialist.

2. It is impossible to understand the issue of the Arabs of the interior by the historical approach alone. If it is not enough to understand the history of the Palestinian cause and how the Palestinians are turning into a minority in their country to understand their current reality. This is enough to understand the emergence of this reality, but not to understand reality itself. What distinguishes their present from their history, otherwise they did not distinguish from the rest of the Palestinian communities in the West Bank and Gaza Strip and the Palestinian Diaspora. Unlike the rest of the Palestinians, they have become an unwelcome part of the entity on their land, even on the margins of their economy, and they have officially become citizens, irrespective of the type of citizenship and of what degree it is ... Along with changes in the pattern of political behavior and political culture, especially since 90% of the Arab citizens at home were born in this Israeli reality, including cultural changes affecting even the language, I mean the language of daily discourse and the language of the press and political language, and turning the village into an economic margin of the city Judaism ... the great paradox that the Arabs lived in the d Vinegar that the update process was at the same time, the confiscation and cut the bonds of the economic relationship with the land and the process of marginalization of the process, and the process of modernization itself is an Israeli operation, and the process of Israelization at the same time.

3. It also came from the fact that the subject of the Arabs in the internal structure did not make a systematic error in understanding their distinction (ie, their distinction from immigrant minorities in European countries), and not only ignored the colonial character of Israel, but also led to the issue of equality, Migrants in democratic countries, ie, as an integration requirement. There is no real integration option for the Arabs in a state, not a state of citizens, nor a state that recognizes a binational structure. On the other hand, it is difficult to understand the political behavior and political culture prevailing in the Arab world from voting to Zionist parties to the emergence of "Arab-Israeli" parties and forces, and to the inability to put forward a national program in the circumstances Special to this community, because he simply did not see privacy. The specificity of the Arabs in Israel vis-a-vis other national and ethnic minorities is a historical peculiarity, and the privacy of the Arabs in comparison with the rest of the Palestinians is structural, not historical. 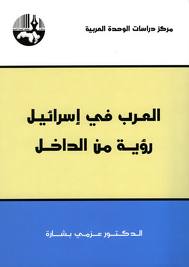