In the Arab Question ... Introduction to an Arab Democratic Statement

This book represents a contribution to the development of today's debate on the relationship between nationalism and democracy in the Arab countries of the present era, characterized by a strong attack by the colonial powers on the sites that Arab nationalism had acquired before, whether it is the confirmation of a common national identity and one, or The sovereignty and territorial integrity of the Arab states, or the possibility of forming forms of union, understanding and cooperation among the Arab states, are not subject to the will of the great powers and do not necessarily revolve around them.

Azmi Bishara mobilizes all his intellectual and scientific resources to prove to the intellectuals who continue to regard democracy as a priority in the process of restoring the Arab national and social initiative that they do not know what democracy means and do not understand the conditions for achieving it in Arab circumstances. In his quest to show the ignorance of his opponents and their lack of theoretical knowledge or historical sense, he unites them and the American neoliberals. But beyond that, accusing them of ignorance of the reality of their communities and the conditions of production and the laws of transition to democracy together.

In the eyes of Azmi Bishara, the democratic call is only valid in the framework of a successful nation. And what distinguishes the situation of the Arabs today is the vulnerability of this nation to the dismantling and sabotage by Western powers. This calls for the existence of an "Arab question", similar to what was called in the nineteenth century the name of the eastern issue. The Arab nation is still "the largest contemporary nation that has not attained the right to self-determination by becoming a sovereign nation and has never had the chance to struggle to become a nation of citizens." Hence, the "Arab issue" means that the same elements that prevent the achievement of the Ummah inside and outside the Qatari state are factors that hinder the democratic transition. "Therefore, there is no democratic agenda.

What Bishara takes then to his Arab democratic opponents, which he addresses openly as opponents, without discrimination, is not their embrace of the democratic idea, but also their lack of understanding that democracy is not valid without a nation. First, the absence of this nation, with its free and independent sovereignty and public opinion, the existence of a strong middle class, and tribal and tribal absence, leaves no chance for the emergence of a democratic movement, let alone its goal. Second, any talk of democracy in the absence of democrats, that is, the absence of mass democratic forces, can only distract public opinion from the main battle, encourage, justify or draw on foreign interventions. Instead, democratic action, based on small groups with no hope of achieving any achievement, would lead to the reform of the Arab societies, in fact only delaying the solution of the fateful national question. 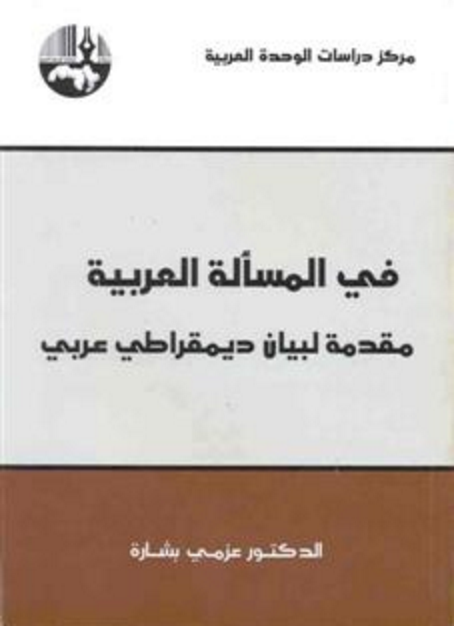