In the Arab Question: Introduction to an Arab Democratic Statement

After several editions, there is still a book on the Arab question: an introduction to an Arab democratic manifestation of Azmi Bishara's significance for the renewed presence, thanks to his analytical depth and early intellectual vision of the " Authoritarianism, in the event of the inability to build democracy as an Arab national agenda that can only achieve democracy if it is led by democrats, and the inability to build democratic systems in the Arab countries, whose unity is based on citizenship and its rights.

The book was published in a fourth edition of the Arab Center for Research and Policy Studies (399 pages in midpoints, documented and annotated), to be a theoretical research in the Arab democratic and exceptional transformation, inspired by the interaction with the recent Arab crises and the personal experience of presenting the Arab national idea and the idea of ​​democratic citizenship In very complex and contradictory situations.

In Chapter I, Pre-Ready Democracy and Democrats, Bishara distinguishes between the conditions for the historical emergence of democracy and its ready-made and sophisticated components during the process of reproducing itself. This distinction is useful for resolving the need for democrats in the process of democratization. It also addresses the issue of the prevailing spirit of democratic transition and its revolutionary aspiration to justice, freedom and equity, and shows the state of decay and its values, which are transmitted as a condition for the acceptance and acceptance of foreign colonial intervention, behind the slogan of democratization.

The third chapter deals with the relationship between the rentier economy and the democratic process in light of the Arab issue, in an attempt to reveal that this issue makes it exceed its role within small countries to a broader cultural and cultural influence in the Arab countries which do not necessarily have a rational economy.

In Chapter 4, Culture as a Constraint, the researcher addresses the issue of political culture and accuses it of hindering democratic development. It is based on the origins of this modern theory and then differentiates between the use of a project as an interpretative tool and another illegal one. And believes that this theory is one of the elements of the establishment of identity policies in the development of relations and conflicts between countries and peoples, especially as culture is ultimately reduced to religion, or to belong to a particular religion.

In the fifth chapter, the problem of the tribe and the state, Bishara presents a dilemma that brings us close to the obstacles in the Arab eye, especially the cohesion of the meeting, economy and politics within the framework of one social unit, the clan, even if it is hidden in the political system, And its components, which is the separation between state, society and economy, party, opinion, family affiliation, individual and group, special space, public space and other distinctions.

In Chapter 6, nationalism, religion and problematic identity, Bishara moves on to another branch of the Arab question in another complication of the process of nation formation, the problematic relationship between nationalism and Islam as religion and civilization. The idea is clarified by distinguishing between them, not by creating a contradiction between them, considering them culturally and historically as the unity of differentiated elements in a historical societal context. In this chapter, he refutes the idea that Arab nationalism is elitist in return for the popularity of Islam.

In the eighth chapter, democracy, political group and identity, the researcher shows the difference between what is called American in other parts of the world the process of nation-building and the process of destroying the nation in the case of intervention in Iraq by ignoring the Arab issue and trying to plant the idea that pluralism is democratic pluralism and sectarian and possible Without nationality.

In the ninth chapter, the Arab issue and democracy, Bishara examines the process of transforming the Arab idea from a democratic idea to establishing a national political framework into a concept of nature that is idiosyncratic, impeding understanding of the relationship between citizenship, nationalism and the nation of citizens. It also discusses the necessity of the Arab idea for democratization in each Arab country separately, and discusses the enemies of the nationalist idea, who pose an artificial contradiction between it and democracy.

In chapter 10, Democracy as a Political Issue: The Specificity of Arab Reform, Bishara presents the experience of Arab political reform after choosing one angle from the Egyptian experience. This is in terms of the absence of a parliamentary experiment with any experience that can serve as a conclusion to political reform in the Arab countries, Relatively early. Reforming parliament in a non-parliamentary system does not mean much. The rise of the president's party is disrupting the little that this reform means. This is also what it means to not touch power sources and key decision-making centers that remain above reform 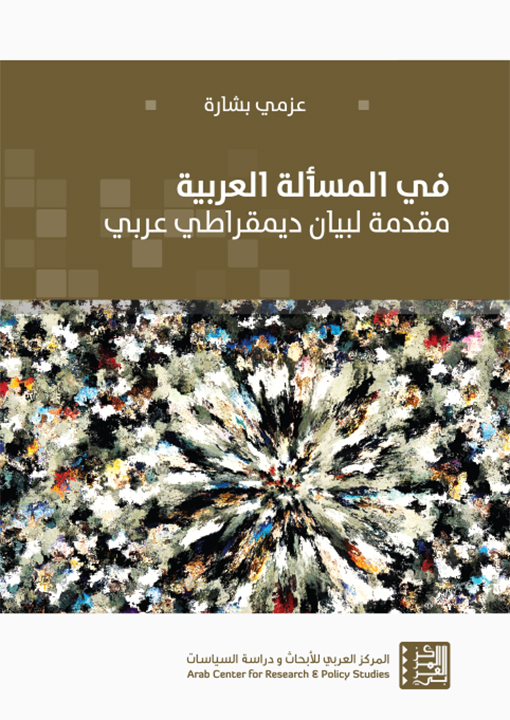