Putin to Trump: From Russia With Love 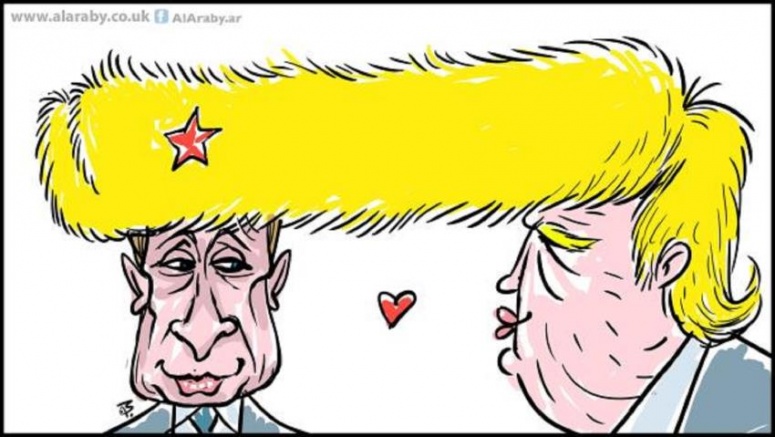 Trump welcomed the praise, and responded in kind.

Earlier, Trump had called on the US to support Russian intervention in Syria, and cooperate with Moscow in the fight against "terrorism".

But the mutual flattery between the spy-turned-president and the billionaire businessman, unlike love at first sight, was not an innocent accident.

Putin agrees with Trump on Syria. And on the same grounds, Putin and Trump agree with France's Marie Le Pen and other far-right politicians in Europe.

The most prominent shared values among these proponents of the "Neo-Right" is demagogical nationalism, nostalgia for glory, and a quest for a having a powerful state.

They also seem to have a firm belief that democracy is not well suited to governing non-Western societies, and thus they understand the "need" for tyranny in the east and the need for authoritarianism in Russia itself.

The Neo Right as such believes in the need to deal with dictatorships, for reasons that have to do with Western national interests, and consider as terrorist groups all those that challenge the authorities in the Middle East, whether these authorities are regimes, colonial authorities or occupation forces.

The Neo Right also believes in restricting immigration, and uses Islamophobia demagogically to win over votes.

In addition, all these right-wing politicians are fans of Israel and its Prime Minister Binyamin Netanyahu, whom they resemble.

In effect, Donald Trump represents a type of populist politicians who, contrary to appearances, do not adapt their rhetoric to appeal to simple folk, as much as they are expressing their actual mentality.

Indeed, a person only needs intelligence and general knowledge to make it in fields like real estate and the security services.

Their rhetoric comes across as simple and unsophisticated, dividing the world as two drinking buddied would in your average bar in the United States: good guys versus bad guys; and winners versus losers.

These people despise intellectuals for making things "too complex".

They accept the counsel of technical experts and scientists when it comes to technology and natural sciences, but regard them as mere tools for controlling nature and the world, disregarding their ethical views on matters like nuclear armaments and the environment.

In the same spirit, these populists regard liberals as hypocrites, and believe placing humanitarian values above politics weakens the national spirit in the fight against enemies.

The mass media make the job of this breed of politicians easier, as though these outlets designed to serve them.

The mass media is interested in sensationalism and quick and easy soundbites above all, and these politicians' statements provide plenty of this.

What the mass media demand is demagogy. The media regard success as a value, and fame being the epitome of success. All this fully suits the rhetoric of populist politicians.

In the not-so-distant past, populist politicians in the West produced by the age of declining democratic competition, thanks to consumerist capital and media, were opposed to a detente between the US and the Soviet Union.

They would thus habitually engage in fearmongering against the threat of "expanding" communism.

Today, these politicians are converging when it comes to enmity against Islam and Muslims. And they are converging in this with one of the leading symbols of the far right in our modern world, Russian President Vladimir Putin.

In truth, Putin does not belong to the Neo Right, in the sense of the modern right in the West that had adjusted its rhetoric to become more in line with the requirements and achievements of democratic life.

This is what Marie Le Pen did with her father's discourse, for example, and the same goes for the German right that absorbed some of the principles of peace groups and environmental movements.

To be sure, there are no democratic achievements in Russia that had become social and political givens, in a manner that would force Putin to adjust his discourse.

Rather, Putin's rhetoric is a combination of revanchist Russian nationalism and 19th century capitalism, which does not respect human rights, pollutes the environment without control, sanctions colonial-like expansion and sees international politics exclusively as a struggle for spheres of influence.

In short, what we see is an alliance between the new far right in late-capitalist conditions and Russian politics that are in the process of reviving the nationalist right-wing worldview that had existed in Europe in the early 20th century.