The Palestinian National Project: Notes on the Future 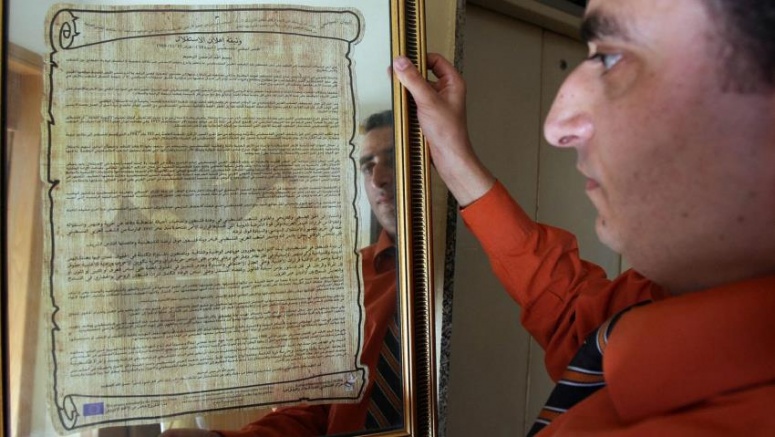 The Palestinian national project, along with the bid for Palestinian statehood and armed resistance, is in crisis.

But the key question to ask is this: Which project can the forces of the Palestinian people engage with - both today and going forward?

Today, the West Bank and Gaza, and Fatah and Hamas, remain sharply divided. The Palestinian diaspora has meanwhile been fully excluded from participating in their people's national liberation project.

In Syria, the Palestinians suffered a new Nakba, this time not confined to them alone, as part of Syria's innumerable Nakbas.

In Lebanon, Palestinian refugees are in political deadlock and live in dismal conditions.

Meanwhile, Arabs are preoccupied with dealing with tyrannical regimes in their own countries.

Initially, we expected the Palestinian cause would benefit from the rise of Arab democracies, complete with a proactive body of Arab public opinion. However, Arab revolutions stumbled - and were drawn into a bloody confrontation with counter-revolutionary waves.

The Arabs are now caught between the forces of the ancien regime and the radical religious groups that have emerged, without being committed to any of the issues championed by the Arab peoples rising up in recent years against tyranny.

Recently, the US president all but mourned the peace process. In September, he omitted any mention of Palestine in his UN speech.

Against all this backdrop, a pro-settler government is in power in Tel Aviv, and Arab leaders in Arab capitals are busy preserving their regimes and tackling internal and regional threats, with Palestine at the bottom of the list of their priorities.

Yet despite this non-favourable climate, dynamics that are favourable for the Palestinian cause have emerged:

• An unprecedented international consensus is emerging in favour of the just cause of Palestine, despite it having been marginalised on the international agenda set by the major powers.

• Palestinian youths are in contact with one another using means that challenge the barriers between the places where they live, including Gaza, the West Bank, Jerusalem, the territory occupied in 1948, as well as the diaspora.

• It has become clear that boycotts, divestments and sanctions (BDS) against Israel work, and can be endorsed by the public opinion in democratic countries.

• The eruption of Palestinian wrath has proven that the post-Oslo generation has not accepted the Oslo status quo, and still dreams of the end of occupation.

I want to say here that I know directly that many are not happy with some of the methods used in Palestinian uprisings. However, a people under occupation is not obliged to give the occupier insurance policies.

Ultimately, despite Israeli brutality, the cause of Palestine is not about the number of dead and injured, and the types of oppression impressed.

The cause of Palestine is above all a question of a homeland that has been stolen and appropriated by colonial force.

It is also a central cause combining what the world has seen as the Jewish Question and the Arab Question respectively, and the challenge is to turn this fact into a strength, not a factor of weakness and complexity as it is now.

The intifada(s) and Palestinian struggle

The struggle in Palestine, call it an intifada, an uprising or anything else appropriate, hurts Israel and her plans in many ways, and it should be expected to continue, given the continuation of settlement and appropriation of Jerusalem.

In the past, Israeli settlement-building was only halted during the years of the intifada, only to resume after it ended. Therefore, leaders must develop a political programme with clear demands for Palestinian struggle at home and abroad, rather than just express support or denounce Israel's brutality.

The recent Palestinian uprising was prompted by Israel's transformation of Arab Jerusalem into an Arab ghetto surrounded by a Jewish city.

Israel has attempted to alter the status quo at Al-Aqsa Mosque, at a time Arab and international actors are preoccupied away from Palestine. And Israel pressed ahead with an extensive settlement building programme, which included schemes for annexing Area C of the West Bank.

The Palestinian National Authority's lobbying in international organisations and temporary departure from negotiations did not make a lot of difference. In the end, Israel remains reassured by the continuation of security coordination with the Palestinian side, which for Israel is the most important issue.

However, it seems to me that the moment of truth is fast approaching, and a decision has to soon be made regarding whether the Palestinians should continue working under the ceiling of the PNA or not.

Currently, the PNA does not feel like it has to make this choice, as one implication could be losing its privileges under occupation.

The PNA believes the current intifada is mostly the result of individual, desperate actions, and is inclined to de-escalate, based on the lessons of the second intifada.

But if the current intifada ends without achieving specific demands, and the PNA returns to some form of negotiations, the same political game would return - albeit with a much weaker hand of cards. This is unacceptable.

It is difficult to imagine a full uprising against the occupation without a clear stance from Palestinian leaders, starting with ending security collaboration and not ending with confronting the occupation head on.

We know that this would be a path completely different from negotiations.

The PNA has tried all possible tactics pertaining to negotiations, but negotiations reached a dead end when the Palestinian side held on to the borders of June 4, 1967.

However, the PNA did not declare an end to negotiations, and continued to coordinate with Israel on security matters, keeping its position ambiguous even at the height of the intifada.

No one takes the Palestinian threat of disowning agreements with Israel seriously. For one thing, this is often meant to urge the world to act, while stressing commitment to negotiations and a political solution.

To escalate the struggle in Palestine into a full confrontation with the occupation therefore requires a clear position from the Palestinian leadership, which in turn will require setting up an all-inclusive framework for Palestinian factions.

This is also the sine qua non for achieving Palestinian reconciliation. Indeed, any Palestinian now knows that reconciliation between the two disparate authorities in Ramallah and Gaza is out of the question politically, due to intractable obstacles and concerns on both sides.

However, reconciliation would be possible if preceded by abandoning the idea and reality of the Palestinian Authority in favour of resisting the occupation.

Then negotiations could be rebooted on clear bases, after Israel and the United States understand the inevitability of fulfilling the rights of the Palestinian people.

Today, the PNA's security services consider "terrorism", not Israel, as the enemy. These security services are willing to confront any plan to resist Israel, including by cracking down on Palestinian protesters against occupation.

It is therefore no surprise that the raison d'etre and structure of the PNA inevitably reinforce Palestinian division.

It follows that the only possible way to escalate the confrontation with the occupation is discarding the Oslo Accords.

At the same time, lessons should be learned from the Israeli siege of Yasser Arafat, and from the experiences of Hamas which, too, is today under siege.

A roadmap for the struggle with Zionism

There are several key fronts in the conflict with Israel and Zionism today:

• The struggle against racist policies in Israel proper, where the emphasis should be on equal citizenship as the antithesis of Zionism, and collective rights for Palestinian citizens of Israel

- This is an important struggle because it challenges Zionism for claiming to have a democratic state, and because it asserts the endurance of the Arab people in historic Palestine.

• The international struggle with Israel as a settler-colonial apartheid state.

We are all aware of the tough conditions of the Palestinians in the diaspora, especially in Syria and Lebanon. For them, the clock has gone back to 1948.

There is a real need for solidarity with the Palestinians in the diaspora, especially in Syria.

The civil wars raging in the Arab Mashreq did not end up improving Israel's image. International public opinion is fed up with the endurance of Israeli occupation and brutality.

Israel has changed little even after the Cold War and the Arab Spring.

Palestinian youths in the diaspora must engage directly in pro-Palestinian action, particularly BDS campaigns, and must do so while transcending Palestinian divisions.

To confront Israel internationally, a democratic Palestinian discourse must also be developed, to counter Israel's claims that it is the only democracy in the Middle East.

This cannot be done using a rhetoric that sees Arab tyrannical regimes as "progressive", peoples demanding freedom in the Arab countries as "reactionary" and Russia, friend of the European and Israeli right, a friend of the Arab peoples.

To have any credibility we must also be democratic and accommodating other peoples' struggle for democracy.

The Israeli exploitation of religion and scripture to advance Tel Aviv's settlement agenda cannot be confronted either by summoning religious zealots to our country; we cannot tackle a religious discourse with another.

It may work to mobilise support for Al-Aqsa, but not to discredit the democratic claims Israel makes in the West, and to expose the fundamentalist essence of Israel beneath its democratic veneer.