The Palestinian National Project: History and the Present Crisis 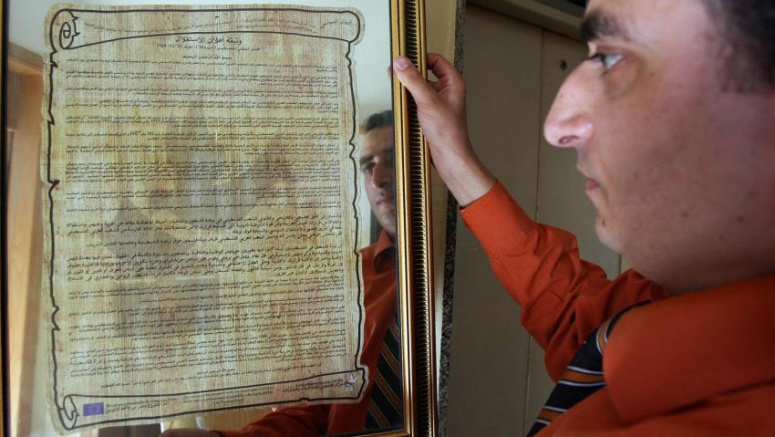 After 1948, the Palestinian national project diverged from the policies of Arab states, at least with regard to the conflict with Israel.

It had turned refugee communities living under the sovereignty of other Arab states into one organised people with a national cause, coalescing around a national liberation movement.

Yet it is difficult to argue that the goal of liberation at the time was a purely Palestinian project.

It was clear that this goal could have only been achieved as a result of a pan-Arab war against Israel. No doubt, many leaders believed this was possible, at least until the war of October 1973.

Likewise, it is, in my opinion, difficult to argue a secular democratic state was a serious programme.

Rather, the proposal was advanced only in response to embarrassing questions by the European left about the Palestinian National Charter. Questions like: "What will be the fate of the Jewish population in Palestine after liberation?"

Among its axioms added after 1967 were that Palestine remains the homeland of the Arab Palestinian people; and that "armed struggle" is the path to liberation.

Throngs of Palestinian refugees thus became regiments of Fedayeen "freedom fighters". The doctrine of this armed struggle included a protracted people's war inspired by leftist ideas, but championed by both the Fatah movement and separate left-wing factions.

Armed struggle became a key component of the Palestinian national project, irrespective of however realistic the political programme it served was, or its ability to actually defeat Israel militarily - this without underestimating the damage inflicted on Israel.

Indeed, the pressure on Israel was only relieved when peace treaties were signed, first with Egypt, and then with the Palestinians and subsequently the Kingdom of Jordan.

The key components of the Palestinian national project represented by the Palestine Liberation Organisation (PLO) were:

The backdrop of this included the Cold War, where the world was divided into two main camps, in addition to the Group of Non-Aligned States, and rising global solidarity against colonialism.

After the Israeli invasion, the Palestinian national project focused on one goal, Palestinian statehood in      the West Bank and Gaza

The shift to statehood

After the Israeli invasion of Lebanon in 1982, the Palestinian national project focused on one goal, namely, Palestinian statehood in the West Bank and Gaza.

All resources focused on the territories occupied in 1967, which helped the protests of 1987 become a national civil uprising led by people in the Palestinian interior.

Several global shifts that previously gave rise to the PLO accompanied these concessions, most notably:

It was not Palestinian policies that caused these changes, albeit they responded to them.

We disagreed between ourselves at the time; our differences over the Oslo Accords were profound.

The question it often had to the opponents of Oslo was "what is your alternative?"

In this new phase, armed struggle was no longer a component of the national project. Resistance was now separated from, if not conflicted with, politics.

Armed resistance was pursued by those who were not part of the political process or the national project for statehood, and "counter-terrorism" operations became one of the functions of the new PNA.

In many cases, the armed resistance was aimed against the political or so-called peace process.

In truth, Yasser Arafat was the last leader to try to reconcile the two approaches, at least as a tactical means to a political end, especially when negotiations reached an impasse.

Arafat paid with his life for trying to bridge two options that became contradictory in the era of security collaboration with the occupation.

Arafat pursued this after it became clear in Camp David that a final settlement with Israel was not attainable through bilateral negotiations, with Israel's conditions for Palestinian statehood invalidating Palestinian sovereignty while retaining Jerusalem under Israeli control.

And with regards to the crucial refugee question, the right of return was simply vetoed by Israel.

Arafat thus decided to return to popular protests and then armed struggle, creating the Al-Aqsa Martyrs' Brigades, in some cases working with Hamas itself.

However, he discovered that he had crossed a regional and international red line, and proponents of the political process within Arafat's movement itself soon rebelled against him.

The political process now had powerful advocates within the Palestinian national liberation movement. New elites emerged that were organically linked to this process.

Since then, the devastating conflict between resistance and the political process has been relentless.

Resistance became a political force and identity of its own, entrenching divisions with the pro-negotiations camp.

Impasse then became outright political conflict, separating two geographic areas that together were supposed to form the Palestinian state.

An aside here: some have called these two areas the wings of the homeland, but to me they do not constitute a homeland, which should be all of Palestine and not just the West Bank and Gaza.

The Palestinian state was never established. Settlements expanded, and Israel continued to alter the Arab identity of Jerusalem in favour of Jewish demography, with enviable perseverance.

Negotiations reached an impasse for reasons we, Oslo's critics, have been writing about for years. These include:

With the failure of the negotiations, the post-1982 Palestinian national project faced a real crisis.

Armed resistance was being pursued outside the context of the PLO and the political process.

And although armed resistance upheld Palestinian constants, its goals did not become a fully-fledged political programme.

When armed groups began speaking the language of political programmes, they also spoke about a state in the West Bank and Gaza. Recall that the resistance had forced Israel to unilaterally disengage from Gaza without a peace treaty, disregarding the PNA based in Ramallah.

After that, resistance became the subject of internal conflict with Gaza.

When Hamas prevailed in Gaza, a blockade was imposed by Israel and Egypt, putting it on the defensive.

Like in Lebanon, after Israel's unilateral withdrawal in 2000, war became Israel's answer to resistance operations.

Armed resistance became a mainly defensive strategy fending for the blockaded territories of the PNA in Gaza, and deterring Israel from attacking. This has not changed, despite the fact that with each round of Israeli aggression, the resistance became more formidable.