Israelis Don't Vote for the Sake of the Arabs 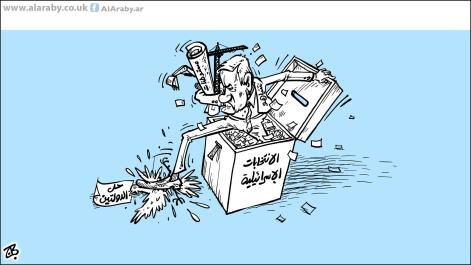 It has been proven, once again, that the Israeli right commands a political (and even social) majority. This is an established fact that has not changed since 1977.

Support for the Zionist labour movement declined with the Israeli economy shifting to advanced capitalism, and with the growing political participation of Sephardic Jews, who have been historically linked to the right rather than to the Labour Party and its project.

Another factor for the rise of the right was the decline in the importance of the historical Zionist labour movement as the task of building the state was largely completed (on the basis of driving out the Arab population and 'repatriating' the Jewish Diaspora). After 1967 and the occupation of Gaza and the West Bank, including Jerusalem, the agenda shifted to issues related to settlement and the relationship between religion and nationalism - issues that the Israeli right was able to address in a way that is more suited to Israel's new expansionist reality.

It is worth recalling here that it was the Zionist labour movement that founded the Zionist polity, and led five wars against the Arabs including the war that ended with the occupation of Palestine in 1948.

Since 1977, the Labour Party has finished ahead of Likud in two general elections, in 1992 and 1999. However, the right and the national-religious camp continued to command the general majority.

There looked to be a good chance that Labour would win again this year, thanks to Netanyahu's personality and lack of credibility, even among his domestic and foreign allies, and his focus on security issues and marginalisation of the cause of Palestine. However, he was able to put the cause of Palestine on the agenda of the right-wing voters by suggesting a government led by his rival Herzog could accept a Palestinian state.

By doing so, Netanyahu attracted votes from right-wing parties that wanted to guarantee Likud would remain the dominant party. Netanyahu also managed to rally right-wing voters by appealing to the instincts and even racism of Jewish voters, telling them Arabs were voting in droves.

In overall terms, no votes moved between the rival camps. Rather, votes moved within the right-wing camp itself, from the smaller parties to Likud.

It is not entirely clear what form the next government will take, whether it will have a narrow base limited to the right and the religious parties, or whether it will be broad-based with the rival camp represented in cabinet. But what is quite clear is that the Arabs who bet on the Israeli elections to tip the balance of power in their favour wagered in vain. The idea is as disconnected from Israeli reality as it is connected to the dismal state of Palestinian and Arab affairs.

The newfound and hyped Palestinian interest in Israeli affairs and elections is not related to knowing the enemy in order to fight it, or to outmanoeuvre it during negotiations, but is essentially related to not fighting the enemy and to the fact that negotiations have reached an inevitable impasse.

Those who have bet on Israeli elections are the same people who have stopped betting on (both armed and peaceful) resistance, though they have recently realised without any doubt the undeniable absence of any Israeli will to reach a permanent solution or even agree on frame of reference for negotiations.

So much for wishful thinking and the belief that the Israeli elections would rescue the "peace process". Far from it, the Israeli electorate gave Netanyahu a mandate to be even more intransigent and to pursue more aggressive policies on occupation and settlement. For the Israelis are never likely to even consider offering "concessions" in the absence of any pressure to do so – pressures of the kind that would make them take the risk of having to pay the price for not offering such concessions. No kind of pressure, Arab or otherwise, is being brought to bear on Israel at the moment. Instead, it is the Palestinians who are coming under Israeli and Arab pressure, especially in Gaza.

Ultimately, the Israeli elections are not a way out for those who have no strategy. The Israelis will not vote for the sake of the Palestinians or the Arabs.

Regarding the Joint Arab List, the positive impact it had was that it spared the Arabs from a fierce electoral battle that they had previously fought in every election against one another, not for power, but for opposition seats in the Knesset and even seats on the margins of the Israeli opposition.

The best they can do is improve the representation of the civil and national issues of their people, and maintain their Arab Palestinian identity against the two colonialist factions in parliament: The crude Zionist right, and the hegemony-seeking Zionist left. But the worst they can do is try to gain the approval of the colonialist by identifying with Israel and claiming to be moderate, separating civil issues from national issues, and engaging in theatrics and staged provocations whose limits are set in advance.

In Israel, the question of equality for Arabs is not on the agenda. There is no such question for the Arabs as there is for Sephardic Jews, for example, or the Orthodox Jews, or as there is for various class-related issues. These are dealt with within the framework of the Zionist consensus, which believes that a Jewish state has a responsibility to deal with them and resolve them.

The issue of equality for Arab citizens, as the indigenous population, cannot be separated from the national cause. It cannot be addressed without renouncing the Zionist identity of the state. Equality for Arabs in a Jewish state is impossible, because it is the antithesis of a Jewish state's definition of itself and of its functions.

Hence, Israelisation and engaging in the Israeli political game on the basis of accepting this reality equates to self-denial. Here, a boundless distortion could occur, starting with the adoption of a colonised mentality and the imitation of the colonialist, to conspiring against and informing on "extremists".

In the mid-1990s, the national movement came up with an equation that balanced between the notions of citizenship on one side and collective national rights for Arabs and holding on to the just Palestinian cause on the other. On the basis of this equation, the movement developed a discourse that has since revolutionised many concepts.

Unity among the Arab parties should not be an occasion to marginalize this idea, but rather, the idea should be turned into a central discourse. The guarantee would be to build a power base for the Palestinian nationalist movement, and educate young people on the basis of these principles.