What motivates a writer to practice different colors of writing, moving from strict theoretical concepts to "literature", in his liberal form and multi-level language? Who incites a thinker, who writes in politics and practices it, to register "self-texts", where there is no place for incitement, agitation and angry tone? Why leave the land of "collective questions" into the space of individual questions?

These and other questions are posed by the reader, who knows Azmi Bishara, himself and follows the lines of his latest book: "chapters" issued by the Arab Cultural Center in Beirut recently.

In his diverse theoretical writings, Bishara took the rule that "the intellectual is the one who lives with people and lives their issues and returns to a forced isolation in which questions are framed and answers are sought for the curiosity of humankind. In the new book, he chose to break the rule of the author, lived his issues and wandered around his soul and returned to his isolation, which he did not leave, to write about the concerns that he was suffering and to generate written pictures describing what hurts the eye and the soul together.

Chapter d. Bishara between the "public", which celebrates the rhetoric and slogans and writing theory, and the spirit, which knows the Palestinian intellectual land and roof, and does not invite others to enter it. Bishara chose to add to the "theory of reality" something else, "literature" or what is close to him, acknowledging that the "ashes of the theory" does not receive all the colors of life, leaving no room for complacency, complacency, nostalgia and alienation.

In the various writings of Bishara, ranging from the economy to politics, from the political economy to Zionism and Israeli society, what tells the truth, his approach from the fragments of the novel to the novel and from the field of meditation to the fragments of poetry tells of a "fugitive fact" Completely. He writes about "expatriate Arab" expatriate: addresses the first alien in a language derived from politics and history, and deals with self-absorption in another language, go from one experiment to another and find no final formula. I do not think he will meet a final formula as long as he starts living the issue he is living in: the Palestinian issue, which whenever I settled on a "sad scene" moved quickly, to another scene more sad. And what expels the formula, which will not reach, the privacy of the intellectual - political, lived between his people as a boy, a child and a calamity, and found himself outside, going to new experiences and the future as he wanted from the memories of yesterday and dreams.
We read on the last cover of his book "Chapters": "A seasoned young man, that is to say, he is stuck in the incompatibility between the two points, in the need between the two." It is alienation in the place, which makes man unable to return to where he was, unable to go to a place he wants. It is also alienation in time, where the past does not return, and what exists does not meet the needs of the soul only a few.

And alienation in place and time except the alienation of the human being in all its existence, from the optical alienation, where the eye falls on what harms, and to the linguistic alienation, vacillating the words on the topics, and the topics deviate from what he formulated words. Although the alienation, theoretically and practically, moves on multiple levels, it is in the case of a gospel that speaks of a Palestinian who is far from Palestine. He met with exile and longed for what was in it and departed. It is this vast experience of loss that makes the "chapters" mirrors the palms of the self, the visual, the visual, the spiritual, the oppositional and the visual, and ultimately the image of the lost ether, which is deposited in the soul and adheres to it.

The book, at the level of it, falls into the "literature of nostalgia", which is associated with a silent, hidden love of sound. We read in a chapter entitled: "If you know": "He is afraid that tomorrow will not see you, and your beauty originally hurts him, you will grow up if his eyes and your eyes are touched, do not despair, you have his intentions, became his only meaning, since he divorced what should be and left abstractions. He takes the gospel of the beloved and exalted, which if peeled from its outer surface, sometimes deceptive, returned to a great mystical love that calls, in the final selection, what is caught and what is not caught at the same time.

Perhaps the longing for an intimate Palestinian time, which was living and withdrawing, was what motivated my political outlook to write overflowing with concepts, and automatically took his hand into a free writing, recording what failed in his mind, soul and sense, and he dictated to write " "Expressing a specific identity and culture, expressing firstly a" spirit of anxiety "that is not met by ready-made forms of writing. In these limits, the meaning of "scriptural experimentation", which does not consult a book and seek refuge in others, is based on the "chaos of experience and writing", if it is true, which is never confined to the experience of a particular individual.

It may be said that those who were banished from the land of "burning the stone", as Mahmoud Darwish said, will not find an alternative. However, Bishara adds to the missing alternative a sharp political and cultural awareness that "strengthens his" substantive alienation "with a new alienation, since in the" Arab exterior ", and the official one in particular, does not leave the" Palestinian inside "deserted. Linus emigrated, in this case, between the beauty of the missing and the thorns present, moving from complaint to complaint, and from locked tongues to an angry tone of criticism. He says in the chapter "Le" and the smell of the evening:

"The chaos of city details do not constitute a panel
But it is enough to obscure the horizon. "

An effective nebula, dropping colorful shapes and closing what he wants, leaving "death", a lucky word in Azmi's book, a wide window of a divided spirit that shapes dreams in "theoretical writing"

"Class disappears and his dreams live alive,
And the classification of his dreams die in his life "

In other words, he is an intellectual who inherits dreams of "winged wings" and inherits them to others. He is meant to be the most "national Palestinian intellectual" who will awaken Palestine at the moment of its paralysis and call for a "nationalism" that can not stand. For this reason: "The idea of ​​death has become a refuge from the assassination of the truth," an unmistakable and flawed atmosphere in which defeated dreamers are based on dreamers walking with optimism to a defeat at the end of the road: 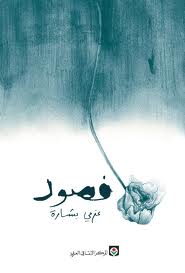